Cherokee will be getting an electric school bus soon thanks to a grant from the N.C. Phase I Volkswagen (VW) Mitigation Program.  The Cherokee Boys Club (CBC) operates the school bus system for Cherokee Central Schools on the Qualla Boundary.  The EBCI (Eastern Band of Cherokee Indians) Air Quality Office collaborated with the Cherokee Boys Club in receiving this grant for the Tribe. 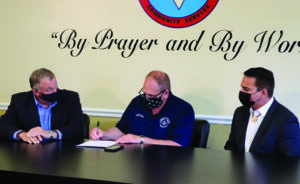 Greg Owle, CBC general manager, and Principal Chief Richard G. Sneed signed a Commitment to Purchase agreement with Carolina Thomas, who will build the bus, at the Cherokee Boys Club conference room on the morning of Wednesday, April 28.

“We’re going to have the first electric school bus given to an organization in the State of North Carolina,” said Owle.  “We’re setting precedent.  It all is wonderful.”

He said that the Cherokee Boys Club wishes to add more electric school buses in the future.  “This is round one.  We’ll be getting a couple more electric buses as time goes along.  We were selected because of our demographic.”

At Wednesday’s signing, Chief Sneed commented, “It’s a very exciting time.  As we see the shift across both the automotive trucking and bus industries away from internal combustion engines and toward more eco-friendly electric platforms, it’s very exciting that the Eastern Band is going to be the first in the State of North Carolina with an electric school bus.  We’re very excited to be the front-runner in this and once again set the standard, not only for western North Carolina but for the entire state.”

The bus coming to Cherokee will come with a two-stage charging station – a fast charge and a slow charge.  The bus will have about a 150-mile range when fully charged.

Information from EBCI Natural Resources states, “This project, ‘Native Electric’, will test a new clean transportation technology that will reduce nitrogen oxides (NOx) and other harmful diesel emissions to help protect natural resources and viewsheds on EBCI lands. The primary contributor of NOx on EBCI lands are mobile sources (93 percent). Diesel engines contribute to this problem by emitting NOx and SOx, which transform into secondary particles in the atmosphere. Emission of NOx contribute to the formation of ground level ozone, which irritates the respiratory system. Ground level ozone pollution, formed when nitrogen oxides and hydrocarbon emissions combine in the presence of sunlight, presents a hazard for both healthy adults and individuals suffering from respiratory problems like asthma.”