The Cherokee Braves varsity baseball team is looking forward to its upcoming season.  Having only lost several seniors last season, this year’s team is experienced and ready to gel.

Jonathan Frady, senior pitcher, said, “I’ve been working mainly on my velocity, my curve ball, and just my arsenal of pitches.  I’ve been working on them, getting them to where they need to be.  I’m feeling really good about pitching in this season.  I feel like it’s going to be a good year.” 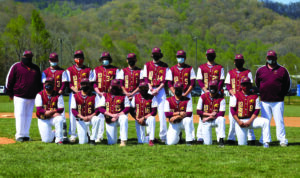 He went on to say, “I’d like to throw a no-hitter this year.  That’d be nice.  In middle school, I had a 17 strikeout game and if I could beat that, it’d be awesome.”

Frady said that winning ball games is the most important aspect to him.  “That’s what means the most to me – as long as we get the ‘W’.  None of that other stuff really matters to me.”

Daniel Thompson, senior outfielder, said of the season, “It’s crazy.  Here we are in the middle of a pandemic, and we’re playing baseball.  So, that’s awesome to me really.  It’s been great so far.  Everybody’s been following the rules.  We’ve been wearing our masks.  It’s hard, but you have to do what you have to do.  I love the sport so I don’t mind it at all.”

He started playing baseball in Little League and said the things he loves most about the sport are being with friends and playing the game.  “It’s just fun.  I don’t see why a lot of people don’t play it.  You never know unless you try.”

When asked about the season, Thompson noted, “I’m just going to try to catch as many balls as I can and throw out as many people as I can, and hit the ball hard.”

Matt Maney, Braves varsity baseball head coach, said of the strengths of this year’s squad, “We’ve got a good pitcher back, we’ve got Jonathan (Frady) back.  We’ve got some key guys in positions from last year.”

Individual and team photos can be viewed and/or purchased by following: https://onefeather.smugmug.com/SPORTS/BASEBALL/2021-Braves/Braves-team-and-individual-photos/

Coach Maney said several key infielders are back this year including Batiste Pepion and Cavan Reed.  “We feel like, defensively, we’ll be in good shape.  Our pitcher has some good experience.”

The Braves are starting the season with a couple of injuries, and Coach Maney is preparing to adjust accordingly.  “We’ve got a couple of guys that are missing that are key players – one is a pitcher and one is a catcher.  So, it’s not that our new guys haven’t played those positions, we just have to work them all together and just get them used to working with each other.”

Following is the Braves schedule (all game times are to be determined):

* Tuesday, May 4 at Hayesville

* Friday, May 7 vs Hiwassee Dam

* Friday, May 14 vs Robbinsville

* Friday, May 28 vs Hayesville