TRACK and FIELD: Cherokee fielding an entire team and looking towards a good season

On the cold, windy day of Wednesday, April 21, the Cherokee High School (CHS) track was full of sprinters, distance runners, and throwers getting ready for a new season.  The CHS track and field team will have a participant in each event at this year’s meets – a feat not seen much in year’s past and both coaches and student-athletes are excited for this season. 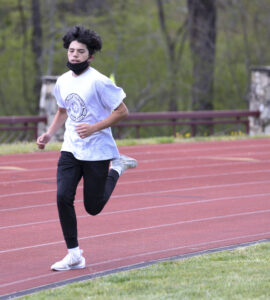 Jaylan Bark, a sophomore runner who will be competing in the 400M, 800M, and the 1600M runs this season, practices on the CHS track on Wednesday, April 21. (SCOTT MCKIE B.P./One Feather photos)

“Track is starting a lot later than usual this year, and it goes through the end of June this year,” said Ahli-sha Stephens, CHS head track and field coach.  “I’m excited for the season.  I think we’ll do really well because we have the numbers.  In looking at the score sheet, we’ll be able to field all of the events which is something we haven’t been able to do in the past due to limited numbers.  But, I think we’ll have a good season this year.”

She added, “Our distance runners are really strong.  All of the cross country boys are back out.  All of our strong sprinters are out…I’m excited.”

Stephens said the team is young this year but has experience.  “Our conference championship team from middle school are sophomores this year.  Most of them are back out, and that team will be successful again.  That boys team pretty much dominated their 8th grade year so I’m looking for them to have another great season.”

Oztin Swayney, also a sophomore runner, will be running the 4x800M relay, 800M, and the 1600M.  On his training to date, he noted, “We were still doing cross country in the winter so I was in shape then and during spring I stopped running.  Now, I’m trying to get back into shape.”

He has a personal goal on the season to post a time under five minutes in the 1600M run.  “That’s a goal that I’ve wanted to get for awhile now.”  He is not far off now having posted a time previously of 5:10.  At the 2019 Smoky Mountain Conference (SMC) middle school championship, Swayney placed second in the 1600M and third in the 800M.

Kensen Davis, a sophomore thrower will compete in the shot put and discus – disciplines he took first place in at the 2019 SMC middle school championship.  “I’m going to try to go to regionals since it is my sophomore year.”

Of the two, he prefers the discus.  “It just comes natural.” 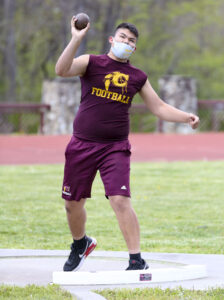 Kensen Davis, a sophomore thrower, works on his shot put form on April 21.

He has high hopes for his fellow throwers this season.  “We’re small in numbers, but I think we can place pretty good.”

Miranda Stamper, CHS throwing coach and a two-time state champion in the discus (2000, 2001), was showing Cherokee throwers proper form during Wednesday’s practice – informing them that each throw counts as the top four per event will represent the school at each meet.  “They all look good.  Some of them have never done it, but they have very good potential.  They’re very strong and athletic kids so it should be fun.”

She added, “Every week, we’ll see who will be the top four so it may change every track meet who gets to go and who gets to throw.”

Stamper emphasized that this year’s throwers are excellent athletes.  “Normally, throwers are throwers – they can’t run.  That’s the way it was when I was in school.  They’d throw me out there, and I’d be dead last.  But, these guys will come out and potentially win in these throwing events and then go run as well.  They’re just athletic kids.”

Following are the schedules for the high school and middle school teams: