SEVIERVILLE, Tenn. – Significant progress has been made on Kituwah, LLC’s 200-acre project in Sevier County (Tenn.).

Last November, leaders of the Eastern Band of Cherokee Indians and the county met to break ground on the property. Since then, there have been negotiations with clients and the participating partners have primed their first major announcements. 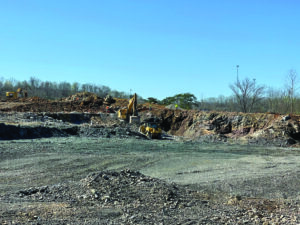 Construction crews prep one of the pad sites at the property off Exit 407 in Sevierville, Tenn. (Photo courtesy of Kituwah, LLC)

Mark Hubble, chief executive officer of Kituwah, LLC, said they are close to confirming their first large tenant. He said that the client is still making inquiries, but they hope to make the deal public in the coming weeks.

“One way or the other, that’s going to be the largest gas station, the largest convenience store, I guess but without trucks, at least in the United States and probably the world,” said Hubble.

He says that there will be more than 100 pumps at this station. This deal will be a ground lease for roughly 30 of the ‘useable’ 170 acres at the site. It is the first domino for ‘Phase 1’ of this project off I-40’s busy Exit 407.

The enormous mounds of dirt that occupied spaces of the property are gone, and the majority of the mass grading for the acreage is complete. The team has moved approximately 700,000 cubic yards of earth in preparation for Phase 1. Part of that movement has been controlled blasts to loosen the dirt for transport.

Hubble says Kituwah, LLC is taking the lead in terms of client search. Another big piece they are currently working on is a hotel option. He said they have been in contact with a few prominent companies interested in collaborating in this space.

“There are several that have reached out; we just have to get the planning in. There’s a couple of projects that we’ll probably self-develop. Because they perform out really well,” said Hubble.

Helping to organize the project and assist on the local front is OE Experiences. Founder and CEO Matthew Cross has been the primary contact for this project.

Cross said that one of the more challenging aspects of a project this size is balancing the timing of signing clients, construction, and opening to the public.

“The goal is we want the best guest experience possible. And construction sites obviously hurt the guest experience. The trick is to balance a scale so that when you open, you open a lot of things at once, and then you deliver on the promise that you’ve made in your marketing efforts and in your development efforts.”

He continued by saying that he is most looking forward to getting these dealings public and moving forward. Cross said it’s a lot easier to find clients and negotiate when you already have some of the leading players rolling.

“From an internal standpoint, we’re very, very busy. Externally ,it’s been very, very quiet. So, I think to get the word out as some of the elements of the property are finalized and our partners are comfortable going public, that will be key. Because that’s going to start the process of momentum. These projects are all about momentum,” said Cross.

He said that the types of clients they are talking to are quite varied. Some are the more prominent names; some are local. He said an interesting case is the operators with a foothold in places like Pigeon Forge or Gatlinburg, where those businesses could expand their clientele.

Cross said that the first thing they are focusing on when making decisions for this project is authenticity.

“Brands are losing their power more and more every year as people look for local businesses and your mom and pops. Airbnb over hotels, the trends are everywhere. So, you have to have a claim over where you are. So, the businesses need to feel genuine; they need to have good people running them that believe in what they’re selling. That shows through to the guest,” said Cross.

Hubble says they will be getting the pad site to the unnamed client in the next three months. Once the client is comfortable going public and has received the pad site, Hubble says it will be a 12-to-14-month build.

All the partners are confident that the first ribbon cutting will occur in 2022.