ANDREWS – With a dominating performance at Andrews, the Cherokee Middle School Lady Braves finished their 2021 season undefeated and won the Smoky Mountain Conference championship.  The Lady Braves defeated the Lady Wildcats 20-0 in their final game of the season on the afternoon of Friday, April 9.  Cherokee school officials related that this is the first time in school history that a middle school softball team has finished the season undefeated. 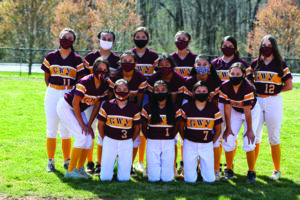 “My heart is overjoyed and filled with pride,” Terri Hogner, Middle School Lady Braves softball head coach, said following their win.  “These ladies have dedicated hours on top of hours of time to build their knowledge and methods of softball.”

The Lady Braves finished the season a perfect 7-0 with the following wins:

“Their camaraderie has been their biggest accomplishment – being one another’s biggest fan and having one another’s back,” added Coach Hogner.  “I’m hoping the interest of youth programs continues to grow and more young girls find joy in being involved with the sport.”

Through six games, some of the Lady Braves stat leaders included:

Julia Layno, Lady Braves catcher and shortstop, commented on the season.  “When we first started, we played a little sloppy.  But, when we started playing more, we came together more as a team.  We have our ups and downs.  Sometimes, we have a bad inning, but the girls are really nice and we’ve been playing together since we were younger and we have a really good chemistry.” 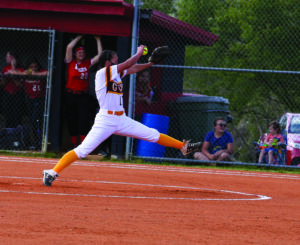 Watiyeli Taylor winds up for a pitch during the season finale at Andrews on the afternoon of Friday, April 9.

Watiyeli Taylor, Lady Braves outfielder and pitcher, said, “It’s been fun getting closer as a team.”

She noted that she most enjoys pitching and when asked what her favorite part about that position is, Taylor said, “Striking someone out.”

Ella Sokol, Lady Braves right fielder, commented, “I’m proud of all of us.  We worked really well together all season, and everybody’s just good and supportive of each other.”

Carrah Swimmer, Lady Braves volunteer assistant coach, said the season has been humbling.  She noted that many of the girls grew up playing with each other on the Mavericks travel softball team and brought skills with them that herself and Coach Hogner were able to add to and hone.

“I feel our girls walk in mentally prepared for every situation,” Swimmer said.  “Coach Hogner does a great job of simulating situations.” 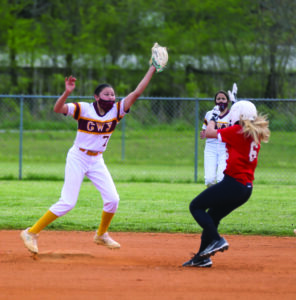 Emilee Brady prepares to tag an Andrews runner out at second base during the final game of the season for the Lady Braves on the afternoon of Friday, April 9.

Swimmer also praised the parents of the players for their dedication and support of the season.