On a beautifully sunny early spring morning, Dawn Arneach walks around the Museum of the Cherokee Indian helping staff and visitors while wearing a nameplate written in a language eons old in a writing system 200 years old.  The nameplate states “when the sun first peaks” (Dawn) and is written in the Cherokee syllabary, an alphabet for the Cherokee language invented by Sequoyah in 1821. 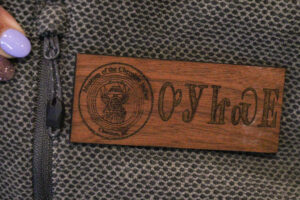 The nameplate for Dawn Arneach, Museum of the Cherokee Indian interim executive director, is written in the Cherokee syllabary and translates into English as “when the sun first peaks (Dawn)”. (SCOTT MCKIE B.P./One Feather photos)

A placard at the Sequoyah Birthplace Museum in Vonore, Tenn. discusses his struggles with creating the language, “In spite of opposition, Sequoyah finally created a Cherokee writing system.  Most of his friends and family teased him.  Some accused him of witchcraft.  It is said that even his wife burned many years worth of his papers.  Sequoyah ignored them.  He explored many ways to write.  First, he tried one symbol for every sentence.  Then, a symbol for each word.  Finally, he used a symbol for each syllable.  Sequoyah became the first person in history to invent a writing system on his own, without first knowing any other written language.”

At the Museum of the Cherokee Indian, Arneach, interim executive director, said, “We are the Museum of the Cherokee, and we should have our language represented here in the Museum, not only for the staff to see and learn but for customers to realize it is still a living language for us.  The more people that see it, the more people will pick it up – whether it’s a word or two or a whole conversation.  It’s a start somewhere.”

She noted that Museum staff is frequently asked to pronounce various words shown throughout the exhibits.  “We’ve started trying to use more of the syllabary rather than the phonetics now.”

Arneach said that Sequoyah’s work on the syllabary was a very important milestone in the storied history of the Cherokee.  “Within most tribes, oral traditions are handed down by stories to family and so on.  But, for us to be able to write with what Sequoyah came up with and share our thoughts from one to another, is actually a lot better.  We were able to write our own history how we saw it and not from another person’s view.” 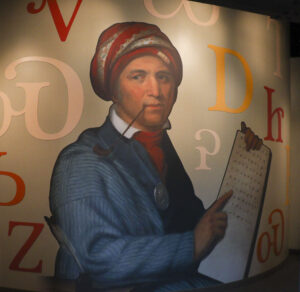 A large portrait of Sequoyah, surrounded by Cherokee syllabary characters, is emblazoned on the walls at the Sequoyah Birthplace Museum in Vonore, Tenn. This is based on a portrait of him that hangs in the National Portrait Gallery in Washington, D.C.

Michelle Long, an EBCI tribal member from the Big Cove Community, is a Cherokee second language learner and currently serves as the Family Partnership lead teacher at the New Kituwah Academy, the Cherokee language immersion school for the Tribe.

“Syllabary is important to me as a second language learner because it helps me with proper pronunciation of words,” said Long.  “There are so many sounds that sound similar and if I see the word written out I can see exactly what that sound is. The sounds are very important, one sound can change the meaning of the word.”

She said learning the syllabary was not very hard for her.  “I picked it up quickly.  In fact, I learned how to read and write way before I could speak conversationally.”

Long started learning the syllabary while in middle school.  “I have been using the syllabary since.  I have been reading and writing for approximately 24 years.  If I had one wish though, it would be that I would speak and understand before I could ever write.  I now use the syllabary first in everything I do as far as language goes.  It’s just natural.”

Charlie Rhodarmer is the executive director of the Sequoyah Birthplace Museum and helps tell the story of the man and the syllabary he invented.  “He originally creates a numbering system first which he turns into an accounting system so that he can use that to remember what people owe him for the work he is doing.  And, I think his original motivation is the fact of making money, being able to remember what people owe him.”

Sequoyah started that process in 1809.  Rhodarmer noted, “He announced in his blacksmith shop, ‘hey, we can create a writing system’.  He spends 12 years, and I think over that 12 years it goes from the point of just being able to make money or to record things, but it becomes about the importance of a people being able to write in their own language.” 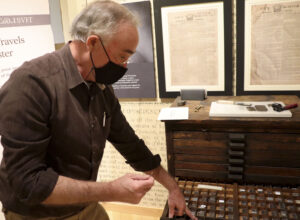 Charlie Rhodarmer, Sequoyah Birthplace Museum executive director, selects type in the Cherokee syllabary to use on an 1800s era printing press to print in the Cherokee language.

He added, “There’s one point where he is in the blacksmith shop and Sequoyah notes that he can write a sentence down of how he’s feeling and put it on the shelf and two years later can come back and know exactly what he was feeling two years ago.”

Using an 1800s era printing press, the Rhodarmer and his friend, Bryan Baker, have begun printing using the Cherokee syllabary.  So far, they have printed small projects and are currently working on laying out the entire syllabary into a one-page printed work that will be available for sale soon.

“Milo would sit at a homemade desk, and we would cover one at a time,” said Caleb.  “I had printouts or would block it out by hand on scrap paper.  He traced it three times and then would try to draw it three times.  As he did this, I would read or come up with a story related to what it looked like that tied it to the syllabary sound.”

Caleb would then draw the character on a white board and re-tell the story.  Then, he would have Milo do the same.  “We would do four to five syllabary characters, and then he would revisit each.”

The two did this for one to two hours a day for three to four weeks.  “At 6-years-old, he was reading syllabary faster than English.” 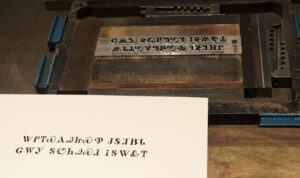 The sheet shown in the photo was printed in the Cherokee syllabary on the 1800s era printing press at the Sequoyah Birthplace Museum on the afternoon of Wednesday, April 7. The syllabary means “Two hundred years of Cherokee language knowledge” when translated into English. Sequoyah Birthplace Museum officials related that Lou Jackson and Marie Junaluska, both elders of the Eastern Band of Cherokee Indians and fluent Cherokee speakers, translated the above phrase as their interpretation of a bicentennial of the syllabary.

Caleb said this process helped him learn more Cherokee language as well, but he was quick to point out that Milo is progressing faster.  “He enjoyed being able to do something better than dad.  Even though I grew up hearing some Cherokee and already had studied a bit, we shared the experience and I learned syllabary a little better myself.”

Milo’s middle name is Yona which is “bear” in the Cherokee language.  “Now, he knows how to write that and his first name phonetically.  This has made more words accessible and therefore a closer tie to his Cherokee heritage.  He will always remember this experience, and he takes pride in what he has learned.  Milo enjoys teaching his teachers and other students syllabary.”

Caleb hopes this will lead to more speaking opportunities for Milo.  “I just wish he could hear the language more.  He’s incredibly talented and motivated, and he’s a kid that would learn to speak if given more resources.”

Caleb says the syllabary is a good way to keep connected to the language.  “If you’re one of the 99 percent of Cherokees that weren’t born into language fluency, it’s one of the most obvious things you can do to bring the language back to our mainstream community.  It tells everyone that you support language revitalization and you’re doing your part.”

He added, “The syllabary opens a new door for second language learners.  I’ve found that I can see the patterns better when it’s a visual character.  And, I wonder if it might be better for children that are just learning to read English.  A first language speaker probably doesn’t need it unless for reading.”

Caleb said that the syllabary will be at the forefront of language revitalization.  “As our elders walk on with the language with them, I think we will start to scramble for whatever we can do.  I think the syllabary is the easiest way to contribute.  Unfortunately, without the knowledge of the language, these are just pictures without a story.  I feel we need to be more proactive than reactive.  I hate to be a pessimist, but the data is so far compelling that we’re in trouble.”

He continued, “Unless we treat the language revitalization State of Emergency with as much urgency as we did the COVID-19 pandemic, the next decade will be a sad one.”

The Cherokee National History Museum in Tahlequah, Okla. opened a new exhibit recently entitled “Sequoyah: An American Icon”.  The exhibit is on display now through Dec. 31. 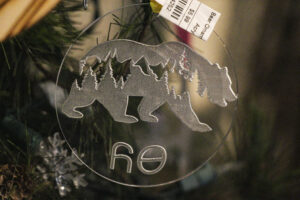 A Christmas ornament for sale at the Museum of the Cherokee Indian has the Cherokee syllabary for the word yona which translates into English as “bear”.

Krystan Moser, manager of cultural collections and exhibits for the Cherokee Nation, said in a statement, “Sequoyah’s legacy continues 200 years after the introduction of the syllabary to the Cherokee people.  This accomplishment, something not done by any other single person in recorded history, has cemented Sequoyah as an icon not just in Cherokee history, but American and even world history.”

Moser added, “Keeping our language alive is an important part of preserving our culture for the next generations.  We look forward to offering a variety of programs and exhibits throughout our yearlong celebration of the syllabary and hope the public will join us to learn more about Cherokee Nation’s language preservation efforts and opportunities.”

Long summed up the thoughts of many on the syllabary and Cherokee spoken language, “In the future, I would hope that we would see more of the syllabary used.  But, more importantly, I would like to hear it.”