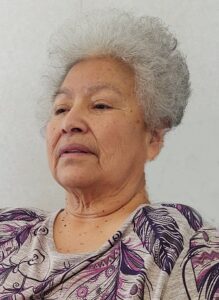 After marriage, Darlene and Richard moved back to Cherokee.  She was employed by Tukasegee Mills and the Eastern Band of Cherokee Indians (EBCI).  Her latest position was with the EBCI Police Department, Office of Investigations, until retirement.

Darlene was a member of the Yellow Hill Baptist Church. In her latter years of life, she was a faithful attendee of the Big Cove Pentecostal Holiness Church.  She loved going to church and worshipping her Savior Jesus Christ.  She was an intercessory prayer warrior and a witness for Jesus Christ.

Homegoing Services will be held Tuesday, April 6 with a 11 a.m. to 12 noon viewing, 12 p.m. to 1 p.m. services.  Interment will be in French Family Cemetery, Lambert Branch Road, Cherokee.

Masks and social distancing is requested.