Dedication to Community: Officer Queen and the NRE K-9 Unit

When Officer Rick Queen first set eyes on a gaunt and abandoned puppy, all he could do was hope.

Queen had been training with patrol dogs for years, and he knew it wasn’t as simple as picking the right breed. Django, as he later named the pup, was a Dutch Shepherd. A breed Queen was familiar with, though there is a significant list of qualifiers to becoming a police dog. 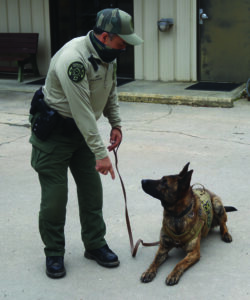 Queen is expecting for Django to receive his final certifications in the coming months. (JONAH LOSSIAH/One Feather photo)

In November 2019, Queen took Django to the veterinarian, who treated the 12-week-old pup for worms and a life-threatening infection. From there, he was ready to analyze the dog’s potential.

“You test the puppies when they’re little to see if they have the brainpower to be able to do it. I took him out and kept him for a couple of days. Tested him and seen that he had the capability of being that. So, I went back to Shane (Davis) and told him, ‘Yes. He can make it.’”

Queen had received the initial call from his friend and head of Cherokee Animal Control, Shane Davis, who had picked up Django.

“There were actually two of them. We got a call from a lady that said that these two dogs were dumped at her house and were tearing into the garbage at her house,” said Davis.

“We got back to the shelter, and I got to looking at the dogs. Just checking them over, you know. We check to see if they have any injuries or anything. I told one of my other guys, ‘You know, these look like the kind of dogs that Rick trains.’ Because you could tell that they were a Shepherd mix. So, I gave Rick a call.”

About a year and a half on, and Queen has groomed Django to be his next Alpha. This March, Django received his certification in narcotics and article searching and hopes to earn his aggression and area search certification soon. Queen prides himself in training full ‘patrol dogs’, meaning they have versatility and not just one area of expertise. 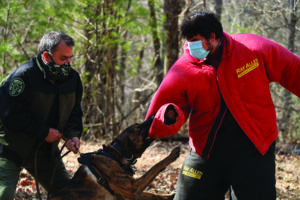 He seems to have done about everything you could in Tribal law enforcement: police captain, assistant chief, SWAT, investigations, among other duties. He’s been with the force for 24 years, including the last 13 with Natural Resource Enforcement (NRE).

He assisted in starting the Cherokee Indian Police Department’s (CIPD) canine unit in 2006, setting up three canine officers. He didn’t begin his training until several years later, however.

The first dog that Queen worked with was Bogart. He was a Malinois, a type of Belgian Shepherd. Emergency Management had earned a grant and could buy a dog. They reached out to Queen about the possibility, and he happily accepted.

The two were inseparable and worked together for almost nine years. Bogart retired about three years ago and passed away last year. Chief was next in line. He was also a Malinois and the first dog that Queen was able to train as a puppy. Chief was a prodigy and quickly took over the mantle by Queen’s side before turning a year old.

Early in his service, though, disaster struck. “Chief was injured while on duty. He was searching a vehicle. These dogs, they’re athletes. They jump up on things to search the entire vehicle, which he did. He jumped down off the vehicle, and he didn’t land right,” recounted Queen.

“It compacted his spine, and he was paralyzed. I had to take him to the emergency vet in Asheville to get him some help. Long story short, he had to have surgery on his spine.”

The vet said that he could recover but estimated that he would only ever get back to 70 percent of what he was. Queen says that he’s made it to about 85 percent but that he is still handicapped. His searching is still as good as it was, but he cannot perform arrests or properly use aggression.

That is why the timing of Django’s arrival couldn’t have been much better. Just a few months after Chief’s injury, he received that call from Animal Control. As soon as Shane Davis noticed what kind of dogs he had picked up, Queen was the first person he called. 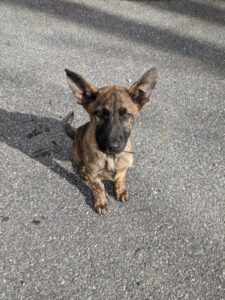 Queen started training with Django at around 12-weeks-old.(Photo contributed)

“It was just a puppy. That dog may have been three or four months old. He was able to judge, ‘I can do something with this dog. I can turn it into a resource for this Tribe. We can save this dog’s life and give it a good life,’” said Davis.

“Because I felt like if he couldn’t train the dog, where he knows the people down-state and the people in Indiana, he knows canine officers nationwide, he could place the dogs. They could get trained. Someone could use them. They could be a resource with some department.”

Davis said that Queen has worked with Animal Control for years, assisting in just this way. They were able to find a home for the other Malinois that Davis picked up with Django.

“I think it’s amazing the work Rick does and the time and dedication he gives to his dogs. I don’t think he gets enough credit, myself,” said Davis.

He said that he is disappointed at the support that Queen has received over the years. While Queen is not one to seek credit, Davis feels there has been a habit of disrespect towards the work Queen has done. He said that was on display last November at Bogart’s funeral service.

“It kind of bothered me. I’m just going to be blunt about it. People may not like what I say, but I don’t feel like the Law Enforcement community here supported Rick when he lost his dog. Animal Control, we’ve worked with Rick so much over the years. We did support him. We went over whenever he went to pick up his dog at the vet; we did the full service with him and his dog. We were the only ones that went,” said Davis.

He said that people don’t understand the effort that Queen puts into his job or how much he cares about his dogs. He said that watching him with Django has been a perfect example of that and that it has been incredible to see how much progress that they have made.

“I guess it’s just hard to explain the amount that was put into all that. I mean, we say like ‘Rick picked it up, he took it to the vet.’ But it was a lot of trips, him going on his own taking that dog to the vet. Because he paid for that out of pocket. The Tribe didn’t pay for that. A lot of the financial stuff there, pretty much all of it, he pays for it. He doesn’t get money for that. It’s hard to really put into words how much commitment he has to that whole thing. Those dogs live with him; it’s his family.”

Queen paid for all of Django’s veterinarian bills himself. The Tribe only has in NRE’s contract for Queen to handle one dog, covering their training and insurance. Queen actually has six dogs, with Chief being the one on the Tribal budget and Django the next in line. He has fully trained three, and he is working on the other half.

The process for training a patrol dog is rigorous, and the one to become a certified trainer is even more so. It is mandated that one trains his dog 16 hours a month. Queen trains with his dogs about 35 to 40 hours a month. That includes a lot of time when he’s off-duty. Queen makes sure that his lead dog is certified in narcotics and article search, tracking and area search, and aggression.  This is what makes them a ‘patrol dog.’ 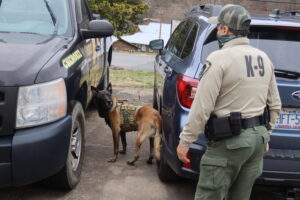 Queen instructs Chief as he is searching for narcotics. (JONAH LOSSIAH/One Feather photo)

Queen is planning to earn his certification as a trainer through the American Police Canine Association (APCA) this year. He would be considered a handler at this point before he passes his tests. First, you must officially train three canines and have proof of that. Queen has trained five. He’s been pushing to get this certification for two years.

“After you’ve gone through all this, which can take years, then you have to take a written test; questions on how to train a dog and how to train a handler to be able to work. Then you go before an oral board of master trainers, and they ask you questions. So, it’s a three-stage test.”

Django will also be receiving his final certifications later this year. Queen is very confident in both of their abilities and says they are just waiting for the official tests. He plans to allow Chief to retire at the end of this year, opening the door for Django to push to the front. Retired police dogs usually stay with their officer, allowing them to continue their bond. That will be true for Chief.

A police canine is an officer sworn in at court. In Rick Queen’s case, his dogs can save lives and consistently assist any departments on and off the Boundary.