Over the past two weeks the Cooperative Extension office in Cherokee has been offering classes on mushroom growing. If all goes well, by the time the classes end, there will be thirty new mushroom farmers on the planet. 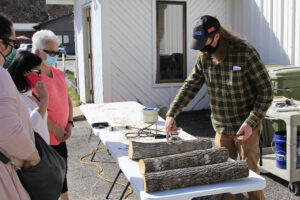 The class was headed up by Benjamin Collette, an Extension agent for the EBCI (Eastern Band of Cherokee Indians) Cooperative Extension. Students came from as far away as Georgia to glean knowledge from Collette who readily shared what he knows about growing mushrooms.

“I grew up in eastern North Carolina and went to school at Western Carolina University for Natural Resources Conservation Management and graduated in 2012,” said Collette.  “I fell in love with the area here. Moved away while I was in the Marine Corps and moved back as soon as I could in early 2019. I currently live in the Sylva/Whittier area and hope to start a small homestead where we’ll settle down with my wife Anja and cat Maggie.”

He continued, “I first started with mushrooms about three years ago when I bought a mushroom log from the Farmer’s Market in Jackson County. I started out growing shiitake mushrooms and when you get your first mushroom, it’s the most exciting feeling! Since then, I’ve expanded to about six logs of shiitake and hope to expand to other types of mushrooms when I have more space.”

Those who signed up for the class were treated to a mushroom farming education. They were required to bring their own two-to-four-foot log as the growing medium, or food, for the mushroom spores.

Different mushrooms “prefer” select wood types, and the sign-up advertising explained which type of log you should bring for best growing of your chosen mushroom. 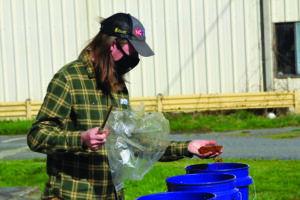 Collette stressed that it was important to use freshly cut wood for growing, because any wood that had been exposed to the elements for even a couple of months could already have competing bugs and fungi that would likely prevent the growth of the desired mushroom. He said that you would not want to put two different types of mushroom spores into a log because one would dominate the other. You would basically be wasting the other, weaker mushroom.

Some of the students asked about being able to grow “Wishi”.  Collette stated that it is possible to grow, but Wishi is even more demanding regarding a “clean” log. You would need to boil your log for a period of time prior to inoculating (the process of inserting the mushroom spawn into the log) it so that no competing critters or fungus could kill the Wishi.

For this mushroom selection, students had a choice between slow and fast-growing shiitake, oyster, and reishi.

Foodthesis.com says that oyster mushrooms were first cultivated in Germany during the first World War and in “Japanese and Chinese culture dishes of oyster mushrooms are frequently used as a delicacy”.

The process of inoculating the different types of mushroom was the same for each. It began by drilling half-inch deep holes in the log and then packing it with a sawdust and mushroom spore mixture (referred to on packaging as “mushroom spawn”) into those holes.

Collette had a special tool designed to “inject” the log with the mixture. Once the holes in the log were filled, the holes were sealed with a special wax to protect the spores from damage while they established themselves and started to grow in the wood. Collette gave instruction that, when finding a place for the log at home, to make sure it is off the ground to prevent any bugs or parasites from entering the log and ruining the spawn. Also, holes are drilled around the entire log, so it is important to keep all the inoculated areas of the log off the ground.

Students taking the class ranged from the very young to elders. Collette ensured that everyone got “hands-on” experience throughout the process and those interviewed seemed to enjoy the class and took home not only the mushroom log, but also a new understanding and at least one new learning.

He said that typically there is only one class per year in the spring but may be looking at other mushroom types and possibly a fall class. “This has always been a popular workshop for me.  Last year we had great turnout and I only used shiitake. This year, I decided to add oyster and reishi mushrooms to the workshop. I’m researching to see which other mushrooms can be added to future workshops, especially with all of the demand for them. This year I did individual workshops with private groups which helped a lot. Some folks would be less likely to come out to a larger workshop with lots of folks due to COVID-19, so these individual one on one workshops were a great success this year.”