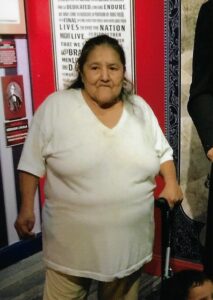 Nannie (Kalonaheskie) Calhoun, 70, of the Big Cove Community of Cherokee, passed away unexpectedly following a period of declining health on Friday, Feb. 26, 2021 while at Memorial Campus of Mission Hospitals in Asheville.

Nannie was born to the late Styles Kalonaheskie and Susie (Armachain) Kalonaheskie on May 16, 1950 in Cherokee.  She was a preschool teacher in her younger years working for the Big Cove Head Start program and she loved life.  She watched the red birds at her home and loved spending her days with her family.  She will be missed by her loved ones and friends.

Nannie will have a funeral service in the Chapel of Long House Funeral Home on Tuesday, March 2 starting at 12 p.m.  The family will receive friends for one hour from 11 a.m. to 12 p.m. in the Chapel prior to the service.  Pastor Hardesty, of the Cherokee Church of the Nazarene, will officiate the service and an immediate burial will follow in the “Henry” Calhoun Cemetery near the home with pallbearers being among the family and friends.