Western Carolina University has received a shipment of vaccines and is prepared to launch its COVID-19 vaccine clinic on Thursday, Feb. 25. 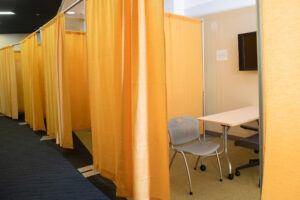 The school has partnered with the Jackson County Department of Public Health to establish its clinic while also assisting the county with its extensive waiting list. WCU set the launch for last Friday, but poor weather conditions delayed the shipment of COVID-19 vaccines. Today, the shipment has arrived, and the staff is ready to go.

“Relief is a great way to put it. It’s been a quick and bumpy road, but I’m happy to report that we actually received 500 Moderna vaccines yesterday, and we’re anticipating another 100. We’ve spent the week training some staff, and we’ve got some more volunteer orientation happening this week as well,” said Courtnee Lingerfelt, the director of WCU’s vaccine clinic.

Lingerfelt said that it has been a stressful process, but it is exciting to get to this point.

“Not just from an employee perspective working here, but for patients. They’ve been waiting so long, and then this moment comes, and it’s such a quick culmination. We’re expecting people to be emotional; I was emotional about mine. We’re happy to be a part of that,” she said.

WCU has received two new freezers specifically for this project and has brought in nursing students from Southwestern Community College to assist with the clinic. Lingerfelt said that acquiring the hardware was in the plans for some time and was not the most challenging aspect of preparation. 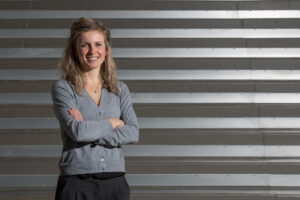 “I would say, honestly, it’s the human resource. The trained and skilled staff out here in rural Western North Carolina, they can go anywhere to work. These are high-quality, high-skilled people. So, asking people to come where we are … well, we’ve done it. We’ve got a team of trained volunteers and trained staff, but that was probably the most difficult part,” she said.

Lingerfelt continued by saying that this clinic would not have been possible if it wasn’t for Jackson County’s assistance.

“It’s definitely been mutually beneficial. They have been instrumental in helping us stand up our processes and kind of letting us stand on their shoulders to learn and build on what they already have,” she said.

Anna Lippard, the clinical services director at the Jackson County Health Department, said that WCU joining in will help to drive the community forward. She said that the Health Department has been in constant dialogue with the university to impart all the lessons learned so far in mass vaccine distribution.

“We have a fantastic working relationship with Western. Here at the Health Department, we are so excited to have them come on board to be another vaccination provider in the community. It’s not only going to help Jackson County residents, but also the region,” said Lippard.

She said that a limited supply of the vaccines caused the waiting list to build up to over 7,000 individuals. Lippard says that a more consistent delivery schedule and WCU’s clinic will propel Jackson County forward in distribution.

“The State actually started giving us a three-week baseline allocation. So, we do have a little bit more of an idea of what we can expect each week for at least three weeks. That helps with planning. Because it’s hard to plan when we don’t know when or how much vaccine we’re getting. So, we’re getting in a little bit of a groove,” she said.

Lingerfelt said that first, WCU needs to help clear the backlog in Jackson County. Then they focus on accepting their own patients. Once they get there, WCU will follow the North Carolina Department of Health and Human Services guidelines.

“We built our clinic on a model of sustainability,” said Lingerfelt.

“We’re prepared to be here for six months to a year if the state needs us to be. Right now, we have the manning that we need. Between being a site for clinical learning and volunteers and a handful of paid staff members, we’re prepared to open and hit it running.”

WCU will be providing updates online at https://facctr.wcu.edu/coronavirus/vaccine-info.aspx. For those interested in working as a volunteer can find information at engagement.wcu.edu/vaccine.