ON THE SIDELINES: Fans should be allowed on percentage, not a set amount

Well, sports fans, basketball season is now over for Cherokee High School, and it was the oddest and quietest season ever due to the lack of fans.  COVID-19 restrictions only allowed 25 home fans per game, and with football starting on Friday, Feb. 26 we will see only 100 fans allowed there.  I believe that all fan allowances should be based on a percentage of the venue capacity rather than a set amount for each event. 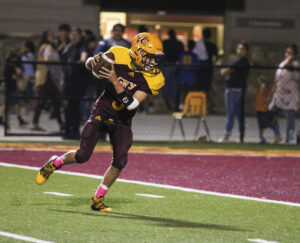 Jonathan Frady, now a senior at Cherokee High School, catches a touchdown pass for the Braves last season. State of North Carolina officials are expected to address fan capacity at venues such as Ray Kinsland Stadium (shown in photo) prior to the start of the 2021 season on Friday, Feb. 26. (SCOTT MCKIE B.P./One Feather photo)

Apparently, I’m not the only one who feels this way.  Meagan O’Connell, a parent of a football player at Weddington High School, has started an online petition seeking more than 100 fans at football games.  She told Fox 46 Charlotte recently, “The end goal is just to have both parents and grandparents be able to watch their kids play.  That’s it!  That’s all we’re asking for.  We’re not asking for a full stadium.”

To me, that’s fair.  Unfortunately, local school athletic departments are being bombarded by comments from angry fans and parents.  Neither Cherokee Central Schools, nor any other athletic department in the state, has any control over the amounts being let in.  That is a state decision coming from Raleigh.

One large issue I have with this is the fact that not all parents and family members wishing to attend football games in particular will be able to attend.  Football is the one sport that has the most injuries, and I can’t imagine, being a parent myself, of having to get a call that my child was injured and was taken to a hospital potentially an hour or more away from Cherokee.  They should be in the stands.

Fox 46 Charlotte reports that Que Tucker, NCHSAA (North Carolina High School Athletic Association) Commissioner, told them in a statement, “We are aware of the online petition regarding spectator limits for outdoor high school athletic events.  While the NCHSAA would love the opportunity to allow more spectators at its outdoor sporting events, the current executive order by Gov. Cooper, with input from DHHS, stipulates a 100 spectator maximum for stadiums with a capacity less than 10,000.  Until COVID-19 conditions across the state improve and the current guidance from the Governor and DHHS is relaxed, the NCHSAA cannot entertain changing these maximums.  The health and safety of our student-athletes and school communities remains of paramount concern.  We must follow the Governor’s executive orders so that we can continue to offer athletic opportunities to students across the state.”

As of the morning of Saturday, Feb. 20, O’Connell’s petition had over 42,000 signatures and was going up with each page refresh.  The petition itself states, in part, “It’s hard to accept this number of 100 spectators outdoors when you walk around local retail stores, restaurants, gyms, and more and there are far more than 100 people, and that is indoors.  Though we are grateful to be playing, we ask that you consider allowing more spectators in.  It can be done safely with, of course, mask mandates and social distancing put into place.”

This issue is not only being discussed among high school sports fans and parents, but it is also being talked about at the North Carolina General Assembly.  Three state legislators, Todd Johnson (R-Union), Vickie Sawyer (R-Iredell), and Danny Britt (R-Robeson), introduced Senate Bill 116 on Thursday, Feb. 18 which is being deemed the “Let Them Play and Let Us Watch” bill.

The bill suggests a change that fans be allowed in at 40 percent of the venue’s capacity.

The bill does state that individual schools would be able to enact stricter capacity levels, but that the 40 percent would be allowable if a school system deems it appropriate.

In a press conference on Feb. 18, Gov. Cooper addressed the issue.  “I understand parents wanting to come and see their students at ballgames.  I remember playing high school basketball and football and seeing my parents up there every time, along with my grandparents.  So, I know how much that means.”

He added, “You’ll hear from us next week (week starting Monday, Feb. 22) regarding a new executive order.  That’s one of the issues that health officials are looking at – the desire to increase the number of spectators at events.  We’ve got to keep the health and safety of North Carolinians as the number one priority.  But, we do understand people wanting to be a part of these events…hopefully, we will see some changes in that area when we make the announcement of the new executive order next week.”

Well, that is good news…well, actually, it could be good news.  We won’t know until the announcement.  If there are changes to this number, it will put schools in a bind of sorts to get it all worked out prior to kickoff on Friday.  But, I’m sure that’s a problem that most schools will welcome.