Rep. Mike Clampitt has been named Co-Chair of the House Committee on Federal Regulations and American Indian Affairs for the North Carolina House of Representatives. 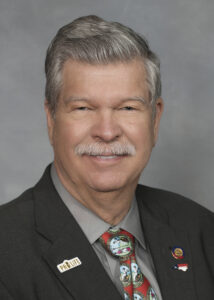 Rep. Mike Clampitt has been named Co-Chair of the House Committee on Federal Regulations and American Indian Affairs for the North Carolina House of Representatives. (Official photo from N.C. General Assembly)

He was named to this position on Wednesday, Jan. 13, shortly after he was sworn into his second term as the North Carolina State Representative for House District 119.  This seat represents Jackson, Swain, and Haywood counties. Clampitt also held this seat between 2016-18.

Rep. Clampitt says that he recognizes the impact and importance of the Eastern Band of Cherokee Indians (EBCI) in his district. He says that he looks to continue building his relationship with the tribal leaders.

“Since Swain County, Jackson County, and Haywood are home to the Cherokee and the Qualla Boundary; as being elected to the State House and having the honor of representing them, I would like to think that I could have a good relationship and rapport, and address whatever needs on the state level that I can for them and their people,” said Rep. Clampitt.

He said that part of his job is to educate other elected officials in the state about his constituents, especially the EBCI.

“I think having an open communication between myself and them is very important.”

Principal Chief Richard G. Sneed has focused on building the EBCI’s relationship at the state and federal level. He hopes Rep. Clampitt will assist with those efforts.

“It’s important that our Nation remain engaged in Raleigh. We are grateful to have strong working relationships with many state leaders such as Mr. Clampitt,” said Chief Sneed.

He said that he sees the effort from state legislatures to increase communication with Native American tribes in North Carolina and that he is in support of this House Committee on Indian Affairs.  “We welcome the formation of this new Indian Affairs Committee in the legislature as a forum for sharing and discussing issues specifically related to Native Americans. Rep. Clampitt will be central to those conversations as co-chair, and we look forward to working with him and the other members of the committee.”

Rep. Clampitt said that he supports the EBCI on most matters and that he’ll do what he can as a legislator to protect the Tribe’s interests. This includes the ongoing dispute between the EBCI and the Catawba Nation. The Catawbas are based near Rock Hill, SC, and have been pushing to build a casino in Cleveland County, NC. This is a move the EBCI has publicly opposed.

“I’ve talked to Principal Chief Sneed about this. I will do nothing to harm any kind of gaming that the Tribe has entered into or any legislation that would hurt the Tribe’s income in any way. I do know there is a move afoot by a group coming into North Carolina from South Carolina, and I’m not in support of that. The EBCI has my true commitment to take and be an advocate for them and my community and my district,” said Rep. Clampitt.

“It puts undue pressure on the EBCI because of the competition with it. If the group that’s wanting to come into North Carolina from South Carolina truly has their interest at heart, they would probably look at going to the South Carolina legislature.”

He said that this is true for other issues presented against the Tribe. Rep. Clampitt noted that he would turn to hear the prospective of the Tribe in those cases. He also wants to protect the Tribe’s primary source of revenue – Tribal gaming.

“I don’t think taking and putting any undue pressure on the gaming that the Tribe has been successful with would be equitable or in good conscience,” said Rep. Clampitt.

North Carolina State representatives serve two-year terms. Rep. Clampitt says that he will continue to support the EBCI’s ventures and will focus on serving each of his constituents equally.