Hosted at Tribal Bingo by the Cherokee Indian Hospital and EBCI Public Health and Human Services, the vaccine event was open to any EBCI tribal member over 40. The goal was to administer 975 doses in one day. 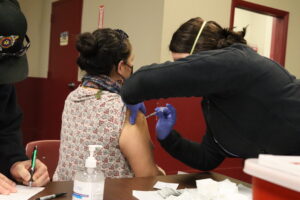 Lydia Raines, a teacher at Cherokee Central Schools, was one of the first people to receive the vaccine on Wednesday. (JONAH LOSSIAH/One Feather photos)

Lydia Raines, a first-grade teacher at Cherokee Central Schools, was one of the first people in line. She got there at 7 a.m., fully prepared to wait three hours and even teach a class to pass the time. Her virtual class was at 8:30 a.m., and Raines taught in line. She said her kids were why she was there, and that’s why she didn’t second guess this decision.

“Not at all,” said Raines.  “That’s because I’m a teacher, and I want to be able to teach again. I had heard the school was going to give shots, maybe. I wanted to make sure that not only am I safe but that I don’t give COVID to any of my students.”

She said that she was very excited that the EBCI held this event, and she jumped at the first opportunity she had to get the vaccine. The timing couldn’t be better for Raines, as CCS announced that they are returning to in-person classes on March 15. 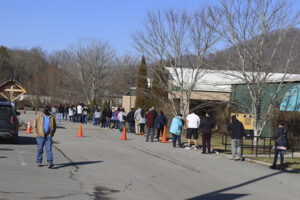 The first people line up for the vaccine get to Tribal Bingo at 7 a.m.

Though Raines might have been first through the door, she is not the only individual buzzing to get the shot. By 10 a.m., the line stretched around the building, with some choosing to bring folding chairs with them.

Vickie Bradley, secretary of EBCI PHHS, says that she has been thrilled with the survey results they have been collecting about vaccine distribution.

“We don’t want vaccinations in supply. We want to stock out every week. Because when we stock out, we can prove that we need more vaccines. We have forecasted, we know what our saturation point is, we know how people are in each age bucket that we anticipate. Our acceptance rate is running about 76 percent in each age bucket.”

Bradley says that this is a good sign considering they need a minimum of 75 percent of the community to receive the double dose of vaccine to reach ‘herd immunity.’

This event was all made possible by an additional shipment of the Pfizer vaccine from Indian Health Services (IHS). Recently, the goal has been to administer about 200 doses a week. However, PHHS and the CIHA organized this event to use the entire additional shipment in one day.

“Our hope is that this will be one of many similar events,” said Dr. Richard Bunio, CIHA executive clinical director.  “Events like these are far more efficient at getting numbers of people vaccinated. At the hospital with the clinic we have there, we can do about 1,000 people a week if we have the vaccine. We’re going to try to do nearly 1,000 in a day here.”

Dr. Bunio says that the action plan has been in place for some time. However, the problem comes with the unknown regularity at which they can hold events as they have on Wednesday. He said that IHS (Indian Health Service) often notifies them on Thursday of what they’ll be receiving the following Monday.

“This is more of a one-time distribution. Unfortunately, we still don’t know what we’re getting next week or the week after that. We wish we did. Because then we could plan for these further in advance. But, we’re in the same boat as everybody else,” said Dr. Bunio.

Bradley says that they will be repeating this event on March 3 to ensure that everyone vaccinated today can come back to receive their second dose. She said that they also hope to hold mass distributions such as these whenever they have an additional shipment from IHS.