ON THE SIDELINES: Deante Toineeta – field general with a jump shot

President Theodore Roosevelt once said, “Speak softly and carry a big stick – you will go far.”  That mantra encompasses the way that Deante Toineeta, a senior member of the Cherokee (H.S.) Lady Braves, approaches the game of basketball – at least from my sidelines’ perspective. 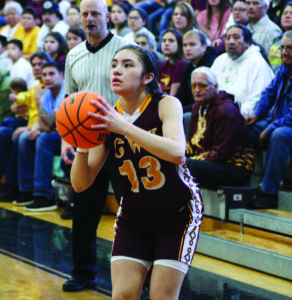 In front of a packed crowd, Deante Toineeta, a senior member of the Cherokee (H.S.) Lady Braves, concentrates as she shoots a three-pointer during a playoff game at Murphy High School during the 2019-20 season. (SCOTT MCKIE B.P./One Feather photo)

Each and every game, she is a field general at point guard, but she does so without screaming or unneeded emotions.  She does so by directing traffic through the lane and trying to move the ball around to her teammates so that they can get the best shot.

On the court, her statistics and accomplishments are impressive.  As a junior, she scored her 1,000th point.  The N.C. Basketball Coaches Association named her to the first team All-District (12) team in 2020 and the second team in 2019.  She was named All-Big Smoky Mountain Conference in 2019 and 2020 and Honorable Mention in 2018 while also receiving CHS Offensive MVP awards those two years.  Also, in 2019, she won Cherokee High School’s Chief John A. Crowe Memorial Most Dedicated Female Athlete Award.

As a freshman, she scored 20 points to lead the Lady Braves to a 71-61 win at Mitchell to send Cherokee to the 1A West Regional semi-finals.  Following that game, I interviewed her and she gave a quote that sums up her basketball mentality, “We are playing really good and not selfish.”

With her spot-on jump shot and ball handling skills, Toineeta has garnered attention statewide and regionally.  HighSchoolOT listed her among their top 15 1A players in the state to watch out for this season.

As with many athletes at Cherokee High School, she excels in the classroom – something else that college recruiters look for.  She is a constant on the honor roll lists, has received numerous Tribal Council Awards for academic excellence over the years, and was awarded a 2019 CHS Academic Award as one of the top students in her grade.

Having a jump shot without the grades will cause a player to be overlooked many times.  Toineeta has both.

Whatever the future holds for her, I’m sure she’ll approach it the same way she does on the court – with dedication, determination, and a smile.