FOOD REVIEW: A new taste in town at Native Brews Tap and Grill

I’ve eaten at a ton of restaurants in my time; both as a customer and as a student. I studied at the University of North Carolina at Greensboro and majored in hospitality and tourism. Under that major, I learned about airlines, cruise ships, accommodations and food and beverage.

I have long been anticipating the opening of Native Brews Tap and Grill. On Saturday, Nov 14, my mom and I were finally able to enjoy their lunch. 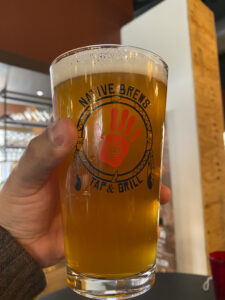 It was refreshing to walk into a new sit-down restaurant here in Cherokee especially since some of the long-standing establishments focus on southern comfort food or diner style food – not to mention the traffic one must fight when getting into the casino.

The restaurant was very nice and clean. All staff were following COVID-19 restrictions and sanitization recommendations. Although wait staff was limited, this can be attributed to COVID-19. An outdoor setting area is also available to guests.

Food and beer are why we’re here. First, beer. Or alcohol rather. Let’s address the elephant in the room.

Our community knows and has battled with alcoholism for years. The public has, many times, shot down the idea of selling outside of the casino. Now that Native Brews lays in the loophole area, I didn’t see anyone out protesting the business. I also haven’t seen people protest Wizeguyz which serves alcohol and limits to two drinks from what I understand.

I have lived off the reservation for a few years, and I have seen operations serving alcohol in restaurants, distilleries, and hotels and know that alcohol education must take place early on in a child’s formative years. This also must be attributed to employees.  Employees in a business setting are the first line of defense when monitoring alcohol abuse in-house. Like the casino’s alcohol training, a business owner who holds licenses must be mindful of such instances. That can be a whole topic or debate for the future. I, for one, support the sales of alcohol on the reservation.

The beer offerings were limited, though flavorful. Native Brews offers five beer options, a hard cream, and a cider. I had the following beers during lunch…Native Girl Pale Ale had notes of honey/honeysuckle. Flaming Arrow Double IPA featured fresh pine and grapefruit notes, and The Warrior Blonde Ale had some smooth wheat, lemongrass and honey.

The menu also featured a house made cocktail menu which I didn’t try that day but was intrigued. 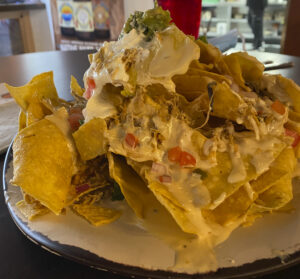 Brewhaus Nachos with added chicken are one of the appetizers offered.

Food offerings included fresh ingredients and nice pub-size portions. My mom and I shared the Brewhaus Nachos with added chicken. For our mains, I took the Chef’s New Mexico Steak, and my mom chose the Grilled Caesar Salad. Beautiful steak and the flavors were amazing. The steak was topped with diced chilis, onions and cheese; side options included broccoli and fried potatoes. My mom spoke highly of her salad and was surprised it was on the menu.  The last time she’d had a well-made grilled Caesar was in Greensboro in 2016.

Filled to the brim, we didn’t order dessert. However, I did see the strudel and was pretty interested in it. Also, a giant pretzel made its way through the dining room while we were paying; another item I’ll have to try.

Prices. This isn’t just any old pub food or cheap take-out. The prices for most entrees are in the middle teens to low 20s. Most appetizers, salads and desserts are in the $7-13 range.  Beer and cocktails are $6-13.

I really like the fact a new restaurant has opened here in town. The staff was pleasant and knowledgeable about the food and drink. The ability to serve adult beverages is also a plus when it comes to attracting guests. This may give way to larger or more unique eateries should the public allow future sales of alcohol outside of the Saunooke Village area and Casino.

I can see this location becoming an institution if staff remain dedicated and focused on the goals of the restaurant and the owner(s) don’t try to chase gimmicks. They have already featured live music which received positive comments. I predict they could expand over time to include trivia, karaoke (once out of COVID-19), pay-per-view events, and other community events or initiatives.

If I worked at a hotel here in Cherokee, I would no longer send people to Bryson City or Sylva for a steak and a beer, but now to the former Fun Park area, now known as Native Brews Tap and Grill.