COMMENTARY: How is there still litter?

As you drive around the Qualla Boundary (aka Cherokee Indian Reservation), you will see beautiful mountains and streams, and you might be lucky enough to catch a Smoky Mountain sunset – one of the best on the planet.  But, unfortunately, you’ll also see something else, something man-made, something unwanted…litter.

Now, I will say that this community has less litter than a lot of others that I’ve seen, but the fact that there is any litter at all in 2020 just boggles my mind. 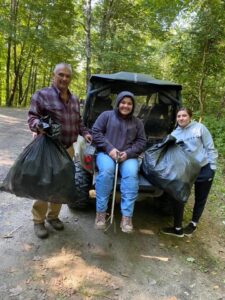 Vice Chief Alan B. Ensley, Timiyah Brown, and Deante Toineeta were among a group of EBCI tribal members who picked up litter in the backcountry areas of the Qualla Boundary on Labor Day, Monday, Sept. 7. The event was organized by Trudy Crowe, an EBCI tribal member from the Big Y Community. (Photo contributed)

Cherokee Code Section 14-5.7 (Littering) addresses the issue stating, “(a) No person, firm, or corporation shall intentionally, carelessly, or recklessly throw, scatter, spill, or place or intentionally, carelessly, or recklessly cause to be blown, scattered, spilled, thrown, or place or otherwise dispose of any litter upon any public property or upon private property within the territory of the Eastern Band of Cherokee Indians (EBCI).”

We all know what litter is, but it is nice to see it addressed and defined in Cherokee Code.  Being found guilty of littering will bring “a fine of not more than $200.00 and any subsequent offense shall be punishable by a fine of $500.00 or one year in jail, or both”.

This is the part that puzzles me.  Who is actually littering?  Is it local tribal and community members or is it tourists…or both?  I would wager that it is both.

Trudy Crowe, an EBCI tribal member from the Big Y Community, organized a litter/trash pick-up day for the backcountry areas of the reservation on Labor Day.  These areas are usually frequented by tribal members so if there’s litter there, it is telling.  But, conversely, when I see it on the Oconaluftee Island or downtown areas, that also is telling in that those areas are more frequented by tourists.

The Keep America Beautiful (KAB) organization has been a leader in the campaign against littering in the country for a long time.  Information from their website states, “Litter is more than just a mark on our landscape.  Litter is costly to clean up, impacts our quality of life and economic development, and eventually ends up in our waterways and oceans.”

According to the study, “Over 51 billion pieces of litter appear on U.S. roadways each year.  Most of it, 46.6 billion pieces (91 percent) is less than four inches.  That’s 6,279 items per mile of roadway.  Tobacco products comprise roughly 38 percent of all U.S. roadway litter.  Paper (22 percent) and plastic (19 percent) are the next largest types of materials.”

EBCI Sanitation comes a few times a week to pick up our trash from the cans, and I appreciate the job they do immensely.  Now, we just need to make sure that everyone living on the Qualla Boundary puts all their trash into a proper receptacle.  When that happens, maybe it will be time to launch a campaign to get tourists to care about the community as well.

Kudos to Trudy and others like her that have organized litter pick-up events for the community.  Let’s all work together to make those events unnecessary.

Matthew McConaughey sums up my thoughts on littering, “There aren’t many things that are universally cool, and it’s cool not to litter.  I’d never do it.”

So, the next time you even think about littering, stop yourself and throw it in a proper trash can instead.  Doing so would get you a solid “alright, alright, alright” from Mr. McConaughey.