I drive by the Oconaluftee River, on the Qualla Boundary, multiple times daily and I frequently take walks on the Oconaluftee River Trail in the Great Smoky Mountains National Park.  It seems that as tourism increases in late spring and summer, a practice increases – one that damages river ecosystems for many species…moving and stacking rocks.

It is actually pretty uncommon to drive by the river and not see people wading in the river and either stacking rocks (known as cairns) or making dams.  Park officials have started the “Don’t Move Rocks” movement and officials of the Eastern Band of Cherokee Indians (EBCI) Natural Resources Division have been working on education about this for several years now. 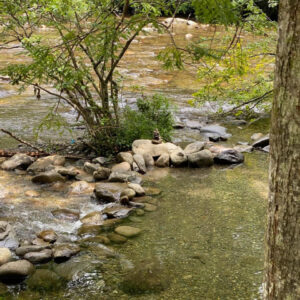 Rocks are seen stacked in a stream in the Great Smoky Mountains National Park. Such alteration and moving of the rocks can destroy habitats for many aquatic species. (NPS photo)

Jessie Snow Neeley, Great Smoky Mountains National Park executive assistant, relates that the park has 2,100 miles of streams and has a vast diversity of species.  “Many of the species that live in park streams are very sensitive to changes, from the fish, to the salamanders, to the tiny aquatic macroinvertebrates that serve as food for larger animals.”

Many of those species’ environments can be altered greatly by the actions of those moving rocks.  “When people purposefully move rocks in the waterways, to create dams, channels, and rock piles, these changes can harm the sensitive species that live there, especially while they are nesting,” said Neeley.  “For example, the large hellbender salamander lays its eggs under rocks during this time of year. Therefore, they are especially sensitive to rock movement right now and can lose a whole season of reproduction if their nests are damaged from rock movements. Therefore, we ask the public to be gentle while they play and leave rocks where they lay!”

This practice is illegal in the park per Code of Federal Regulations 2.1(a)(1), “…the following is prohibited: (1) Possessing, destroying, injuring, defacing, removing, digging, or disturbing from its natural state: (i) Living or dead wildlife or fish, or the parts or products thereof, such as antlers or nests.”

Caleb Hickman, EBCI supervisory biologist, and the team at EBCI Natural Resources have been working for several years to educate the public on the effects of moving rocks to the area’s aquatic ecosystems.  “It has the potential to remove habitat for a variety of organisms- including directly influencing fish and indirectly our trout industry through their food source (aquatic insects). Lifting or moving larger rocks could influence hellbender (waterdog) habitat during a critical time right now- they are starting to breed and need rocks for protecting eggs. After they hatch, the hellbender babies will be using smaller rocks to hide from fish predators in a few months from now and be pretty vulnerable for a couple of years.”

Law is sorely needed for this on a tribal level.  It should be made illegal, in the Cherokee Code, to move and stack rocks in all tribal waterways.  The problem with my idea here is that the overwhelming majority of people I see engaging in this practice are tourists.  Now, I’m not just driving by and looking at the people in the river and making a snap judgment about ethnicity.  I am looking at their license plates.

So, with that being said, even if a tribal law was passed, it wouldn’t be enforceable against non-Indian tourists.  But, it could be a possible deterrent.  If the Tribe were to pass such law and post it in highly-trafficked waterway areas, it might curb some of this behavior.  Sometimes, a sign is all that is needed.

The late Margaret Mead, noted cultural anthropologist and recipient of the Presidential Medal of Freedom, once noted, “We won’t have a society if we destroy the environment.”

Sometimes, as in this instance, a little fun in the sun that seems very innocent can lead to habitat destruction.  That’s why education is so vital in the fight to save all natural environments on this planet.  This is a prime example of “look, don’t touch”.