An agreement many years in the making came to fruition on March 25, 2019 as the Eastern Band of Cherokee Indians (EBCI) and the National Park Service (NPS) signed an agreement regarding the gathering of sochan (Rudbeckia laciniate) in the Park by tribal members.  Now, in its second gathering season, the tribal program has grown from 11 permits issued the first year to 24 this year.

Maria Dunlavey, EBCI Natural Resource Program conservation outreach coordinator, thanked the program’s participants for their help and cooperation in guiding its growth.  “The gatherers who participated really helped us iron out the details of how to run the program, and this year we were able to hit the ground running.” 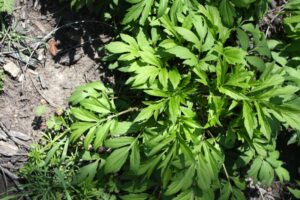 The EBCI Natural Resources Program issued a report on the second season of sochan gathering in the Park recently noting that 12.3 bags were gathered which amounted to 330 servings of sochan. (NPS photo)

She added, “The biggest challenge of the increased numbers was probably making sure we held a training session everyone could attend. The training, which covers the details and rules of the gathering agreement, is necessary to get a permit, so we wanted to make sure we didn’t exclude anyone.”

Dunlavey noted that the day of the two planned trainings in February saw widespread flooding in Cherokee.  “We still held our sessions as planned, but we made sure to contact everyone who’d submitted an application and let them know we’d arrange a backup for them if they couldn’t make it.  In a way, that was a helpful dress rehearsal for the COVID closures.  I was already used to texting and calling and emailing everyone with last minute changes.”

She said this entire year has been about adaptation.  “We adapted a lot on the fly. The Park was tremendously supportive — Joey [Owle, Secretary of Agriculture and Natural Resources] and I were on the phone with Superintendent Cash the morning of their shutdown, making sure gatherers would have continued access to sochan-rich areas. There was a while when not even the NPS biological staff was coming onto the park, but our gatherers still were.”

The EBCI Natural Resources Program issued a report on the second season of sochan gathering in the Park recently noting that 12.3 bags were gathered which amounted to 330 servings of sochan.  The first day of the gathering season was March 1, and the peak harvest week was April 6-12.  The report goes on to state, “Overall, 78 percent of this year’s sochan harvest occurred during the Park’s COVID-19 closure (March 24 – May 9).”

Dunlavey said, “The other thing I wanted to make sure of was that all of our gatherers could submit their harvest reports safely. Usually, we’d accept them by email or by a physical drop box, but when our offices closed I reached out to everyone and asked them to get me the info however they could. A lot of people would fill out their form and text me a photo, which was great. We also have some elders who aren’t smartphone users, and they would call me with their info so I could fill out the report for them. By the second week I was able to run the whole program from home.”

She is hopeful that the program will continue to grow and grow. “There’s a lot that goes into building a program like this from scratch, and at this point, we’ve pretty much done it all. If we ever have a normal gathering year, without any pandemics or floods or government shutdowns, it’ll seem easy in comparison.  But I think all those things put the significance of this program in focus, too. Safe access to healthy traditional foods doesn’t become less important during a pandemic, it becomes more important.  Hopefully, we can continue growing.  The gathering agreement allows 36 permits per year, so there’s definitely room for more people to participate.”

The National Park Service put into practice new regulations in August 2016 whereby members of federally recognized American Indian tribes can legally perform traditional gathering of plants in national parks that encompass their traditional territory.  As part of those new rules, tribes must enter into agreements with their local park such as the EBCI did with the Great Smoky Mountains National Park.

With the sochan agreement in place and the program having finished its second year, the EBCI is now setting its sights on an agreement for harvesting ramps.

“Ramps are going to be tougher than sochan — they’re less resilient to disturbance, and they’re being exploited all across the country, especially by people who don’t practice good harvest ethics,” said Dunlavey.  “Right now, Tommy Cabe in our office is leading a multi-year study with the U.S. Forest Service that’s going to show how ramp populations do when they are harvested with good ethics — cutting the shoot and leaving the root, etc. Western science hasn’t looked at this before; none of the studies on ramps have used the Cherokee method of harvest. So, it needs to be a long-term study to show how the plants recover. Once we have those results, we’ll take them to the park and see what we can do.”

She said that the success in the sochan program will help in developing one for gathering of ramps. “Whatever that looks like, I think the relationships we’ve built through the sochan program can only help. We have a really good working partnership with the park staff. And, we’ve learned a lot about how to support our gatherers. They’re the ones out there forging — or re-forging — this relationship with the land, and I think they feel the gravity of that role. The more we invest in them, the more they rise to the occasion.”