Park celebrates 2019 Employee of the Year 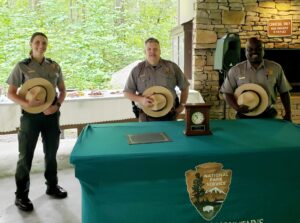 Great Smoky Mountains National Park announced recently that Steve Spanyer was chosen as the 2019 Employee of the Year. Recognition of the Employee of the Year has been a tradition in the Smokies since 1984. Although the format of this recognition has changed over time, the park is pleased to continue to acknowledge one employee each year who’s work goes above and beyond. Steve was nominated and selected for this award by his peers, based on his outstanding performance; his innovative improvement to job practices; and his mentoring attitude.

“Steve has been a supportive and pioneering force in the Smokies,” stated Resource and Visitor Protection Division Chief Lisa Hendy. “Steve has often taken on challenging details to further the progress of the law enforcement and emergency services operation. His willingness to step up and help for the greater good is a mark of his stellar leadership. However, it is the grateful testimony of his subordinate Rangers that best describes his value to the division, the park, and the entire National Park Service as he has mentored dozens of the next generation of Rangers.”

Serving as a Supervisory Park Ranger in the Visitor and Resource Protection Division, Spanyer has led the Cades Cove Rangers through high-profile incidents, including search and rescue operations and criminal investigations. For over a year, he has been filling the position of acting Law Enforcement Specialist. Spanyer has had a large role in the development and deployment of the park’s new computer aided dispatch (CAD), which helps track both people and the resources available to them in the park.

“Steve exemplifies what a Ranger should be; hardworking, dedicated not only to the mission, but to supporting his coworkers,” said Superintended Cassius Cash. “He leads by example and motivates his staff to maintain high standards of performance.”

Originally from Louisville, Ky., Spanyer attended Xavier University where he received his bachelor’s of science degree in natural sciences in 1988 before joining the Peace Corps.  He lives in Maryville, Tenn. with his wife Jaquie, a teacher in Maryville City Schools. They have three children: Haven (age 25), Jake (age 22), and Siena (age 19). When Spanyer isn’t working, he enjoys woodworking, painting, and spending time with his family.