A Cherokee sweat lodge structure, dating back hundreds of years, has been found in the Yellowhill Community.  Just off of Acquoni Road, the EBCI (Eastern Band of Cherokee Indians) Tribal Housing Division has been working on a housing project recently, and a crew moving topsoil inadvertently uncovered the archaeological anomaly. 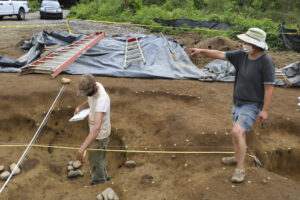 The structure was found in that area and right at the end of the initial phase of the archaeology work according to Tasha Benyshek, senior archaeologist with TRC Solutions in Asheville.

“They (Tribal Construction) uncovered this big stain in the ground,” she noted adding that it didn’t look like an intact house structure she is accustomed to seeing.  “And I thought, ‘what in the world?'”

She added, “I thought that maybe it was just a big tree growth, but we kept investigating.”

The archaeology team then found a piece of cazuela-shaped pottery dating from 1600 A.D.  “All of a sudden, rocks showed up in the bottom.”

The team began speculating what the structure might be.  “It’s a big, huge complex, we think, of sweat areas.  Also, there is no domestic debris, aside from the cazuela.” 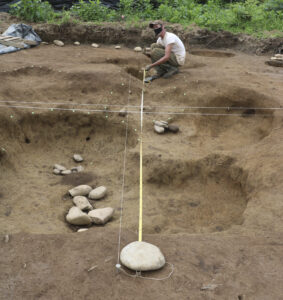 Most of the structural area of the sweat lodge can be seen in this photo.

Benyshek further commented, “I have not seen anything like this anywhere in the southeastern literature.  I’ve never seen anything similar to this.”

Evidence of inhabitance was found at the site from around 600 A.D.

“I am not familiar with any potential sweat lodge feature in the area that is comparable to this,” said Brian Burgess, EBCI Tribal Historic Preservation Office (THPO) senior archaeologist.  “We just don’t encounter these often.  The lack of cultural material recovered, with the exception of the bowl, doesn’t give many clues as to how this structure was constructed or used by the builders.  No clear post pattern was observed surrounding the resource.”

He believes the find dates back five centuries.  “We think the specific feature and bowl date to the 16th Century, and the site overall has earlier and later components.  The science of archaeology is about 25 percent field work and 75 percent is devoted to research and lab work.” 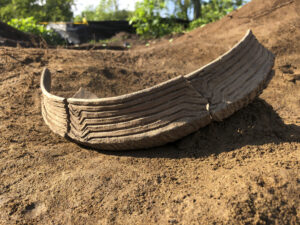 This piece of cazuela-shaped pottery dating from 1600 A.D. was found at the site. (Photo contributed)

Burgess said the find and the work done at the site is important for future study.  “TRC did excellent work at this site, and we are hoping once all data collected is processed and analyzed, we will gain a greater understanding of what was going on in the Oconaluftee River Valley in the distant past.  THPO plans to use photogrammetry to create a 3D model of the sweat lodge and adjacent features, something we are excited about.  We appreciated the EBCI Housing Program for securing funding for this project, and for their patience during a surreal field season.”

Benyshek said more was found at the overall site.  “We did find some graves and a couple of structures with post patterns.  It’s really neat, though, what we have found out here for such a low-density area.  We found time periods that are hard to find.”

She related that the graves found have been protected and avoided. 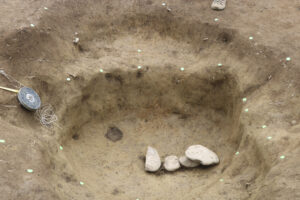 The rocks shown were unearthed, along with the rest of the structure. (SCOTT MCKIE B.P./One Feather photo)