The Kituwah LLC has been granted a portion of land to place model homes for viewing in Cherokee.

Earlier this year, the Eastern Band of Cherokee Indians’ economic development entity purchased the Cardinal Homes, a modular home company that is based out of Wylliesburg, Va. 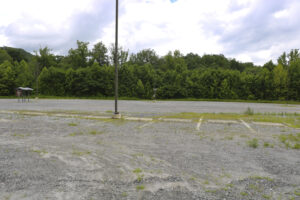 The Kituwah LLC has been granted a portion of land, shown on the afternoon of Tuesday, July 7, to place model homes for viewing in Cherokee. (SCOTT MCKIE B.P./One Feather photo)

Mark Hubble, chief executive officer of the Kituwah LLC, spoke at Tuesday’s Budget Council to explain the need and benefit of acquiring land for these model homes.

“We’ve had a lot of inquiries from tribal members. And so, I think this will be a pretty successful endeavor. In order to actually show them the homes, I met with Chief Sneed and we found four location here in Cherokee that we would put models on. So that somebody could actually tour them,” said Hubble.

He continued by saying that these models wouldn’t require plumbing and would be on a temporary foundation. They would need electricity and to have an active air conditioning unit to maintain air circulation.

Cherokee County – Snowbird Rep. Bucky Brown asked Hubble about the status of the Cardinal Homes website, and if there was a function for looking at individual homes.

“There is a Cardinal Homes website,” said Hubble.  “They have a lot of them, they don’t have all of them… we’re updating that website.”

Hubble said that there are over 200 floor plans in the Cardinal Homes catalogue, and that the plan is to digitize all of those and assign them into themes.

Wolftown Rep. Bo Crowe asked Hubble about using Cardinal Homes to help with the project of getting a new building for an Adult Day Care center.

“I believe they already have plans on it,” said Rep. Crowe.  “So, this might be something we need to start pushing to get done and use our modular company to do the buildings for us.”

Hubble answered, “Absolutely. Because we can modify them for sterile rooms or whatever is required. The only part you would have to build on site, obviously the foundation other things like that would be built on site, is some of the center rooms because it won’t fit in the module. But it’s ideal for that kind of stuff. Small office buildings can be done with it, obviously hotels, and homes.”

Hubble explained what they were looking for in the ideal location for the model homes.  “We were looking at traffic, so they can be seen by the public and seen by tribal members. They were relatively easy to get to and centralized. The other site criteria was security. We don’t want them vandalized.”

Hubble says that the Kituwah LLC and Principal Chief Richard G. Sneed shared a top choice for the location of the plot of land. That area is the former casino employee parking lot across from Taco Bell.

“It’s a good site. It’s close enough so I don’t have to add people. If someone’s interested, they can just come over to our office. It’s got pretty good visibility for security issues, and it can be gated relatively easily.”

Hubble said that while they found four potential locations in Cherokee, they will only pick one. However, there are plans to establish a second site.

“We have not identified a site out in Murphy. The reason we would like to put the second site near Murphy is because we sell to the Atlanta market…and we’re getting licensed for Tennessee.”

Hubble also mentioned that they have agreed to sell homes to tribal members at fully burdened cost. This means that the LLC will not be turning a profit on sales to enrolled members.