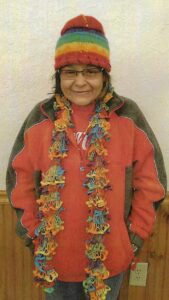 Teresa Ann French, 55, of Cherokee, went to her Heavenly home on Wednesday, July 1, 2020. Teresa was known by most everyone as Tracie. The daughter of the late Marvin (Skilly) French and Katherine (Kay) Bain French, she is preceded in death by her brother, Daniel Marvin French.

Tracie had at one time been a wildland firefighter. Most recently, she did stonework and masonry. A long-time fan of the Washington Redskins, her favorite basketball team was the Maryland Terrapins. Tracie enjoyed crafting and doing beadwork. She was generous with her humor.  Tracie was a warrior woman who loved her family and her tribe. She wanted what was best for everyone. Tracie was a mom, a dad, an auntie, a sister, and Nana.

The family will have Visitation for Tracie French at the First Baptist Church of Bryson City on Tuesday, July 7 beginning at 5 p.m. with the Memorial Service to follow at 6 p.m. with Pastor Ted Duncan officiating.