Late Cherokee artist to be featured at Gilcrease Museum

The innovative artistry and work of the late Shan Goshorn will be featured in an upcoming exhibit at the Gilcrease Museum in Tulsa, Okla. The baskets shown in the photo were created by Goshorn in 2013 and are entitled “They Were Called Kings”. (Photo courtesy of Shan Goshorn)

Information from the Gilcrease states, “Through Goshorn’s hand-woven basketry, ‘Weaving history into art’ will encourage engaging, empathetic interactions with difficult subjects, including the loss of Native homelands, cultural genocide, violence directed at Native women, and inappropriate cultural appropriation in a non-threatening experience that promotes informed dialogue among Native and non-Native audiences alike.”

Although a gifted artist in various mediums, she was most renowned for her basketry where she developed a style of using printed archival paper as splints to weave photos and images into her works.  In a 2014 interview, she told the One Feather, “It continues to be my goal to represent Native people – and especially the Eastern Band – in a good way; to educate international audiences about the issues that are unique to Native people.  My current basketry work best illustrates the importance of informing people about the continued impact historic decisions have on Indian people today.” 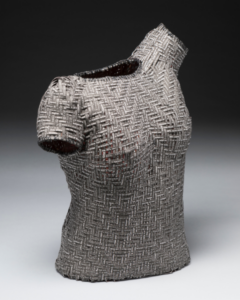 The ‘Weaving history into art’ exhibit will debut a work by Goshorn, her last before her death in 2018, entitled “Squaw” – a commentary piece based on the ancient Venus de Milo work by Alexandros of Antioch. (Photo courtesy of Gilcrease Museum)

According to the Gilcrease, the ‘Weaving history into art’ exhibit will debut a work by Goshorn, her last before her death in 2018, entitled “Squaw” – a commentary piece based on the ancient Venus de Milo work by Alexandros of Antioch.  Of the work, Gilcrease officials noted, “Juxtaposing this model with the title ‘Squaw’ creates a tension and contrast to the Western ideal of beauty against a pejorative used to reduce Native women to disposable sexual commodities.  ‘Squaw’ will serve as a catalyst for much-needed conversations on why Indigenous women suffer disproportionately higher rates of violence than non-Native women and the judicial system’s reluctance to prosecute these crimes.”