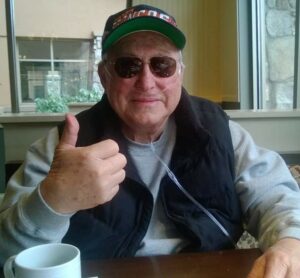 On June 10, 2020, William “Bill” Smith Jr. decided he was ready to leave his earthly home and head off to his next adventure. He is preceded by his father, William Augustus Smith and his mother, Gertrude Smith.

Bill said goodbye to those he left behind which include his loving wife of 20 years, Marian Smith; his brothers, Bob Waterston and Buford Smith; along with his nine children, 25 grandchildren, and two great-grandchildren. He loved his children so much, each and every one of them. Bill had so many family members that he loved and that will carry on his memory as well as his funny stories.

Bill was very proud of having served in the United States Army during the Vietnam Conflict. A number of people will remember Bill as a ray of sunshine on the Qualla Housing  Authority Team for many, many years. He always had a smile on his face and a joke to tell. Bill loved to read and will be remembered for his love of books, animals, and women, but he loved his wife Marian the most. His smile and humor will be greatly missed by everyone that knew him.

William “ Bill” Smith Jr will have a funeral procession leaving Long House Funeral Home on Monday, June 15 at 1:15 p.m. which will take him to the Yellowhill Veterans Cemetery where he will have a Graveside Service with Military Honors provided by the American Legion Steve Youngdeer Post 143 at 2 p.m. Pallbearers will be among family and friends.