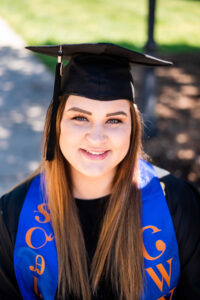 Faith Long, a member of the Eastern Band of Cherokee Indians from the Tow String Community, graduated recently from Carson-Newman University with a bachelor’s degree in business administration with an emphasis on management.  Following graduation, she will return to Cherokee to work for The Sequoyah Fund and start work on a master’s degree program.

While at Carson-Newman, Long was a member of the Freshman Honor Society known as Alpha Lambda Delta and served two years as the vice president for the National Honor Society Gamma Beta Phi.  She also participated in track and field in the shot put, weight throw, and hammer throw events.  During her sophomore year, Long served as Miss Cherokee 2017-18.  She was also a four-year fellow for the Jones-Bowman Leadership Award Program.

“I am so grateful to the Education Dept. for the opportunity to further my education and for the support I received during my time at Carson-Newman,” she said.  “I am also thankful for my family for believing in me even at times when I wanted to quit.”

She is the daughter of Sheila Conner and the late Ronald Long.