“Communication is everything”: Communities finding the best way to support

With the Black Lives Matter movement reaching global support, many organizers in small towns have begun to demonstrate their support on a local level. 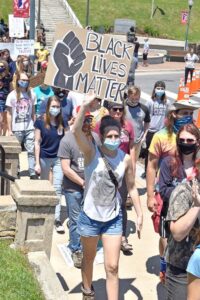 On June 2, a ‘solidarity march’ in Sylva brought together hundreds of people. (Sylva Herald photos)

There have been several demonstrations around the region over the past couple of weeks. Asheville has seen large protests and Bryson City had a march this week. Just down the road in Sylva there has also been gatherings, all of which have been entirely peaceful.

On June 2, a ‘solidarity march’ in Sylva brought together hundreds of people. They held speeches at the courthouse steps and marched downtown. The event was calm from beginning to end, with the organizers and many protestors consistently thanking the police officers that were helping to direct traffic and facility the demonstration.

“Communication is everything,” said Chris Hatton, Chief of Sylva Police.

Carrie McBane, who was one of the organizers of the march, said that she has been impressed with Sylva police during Hatton’s time there. McBane works with the Jackson County chapter of Down Home North Carolina, a grassroots organization that ‘works to build multi-racial power for working families in North Carolina’s small towns and rural places.’ However, the demonstration was not organized directly by Down Home North Carolina. 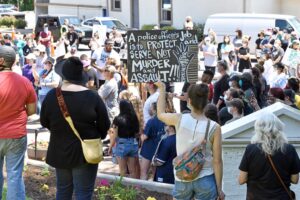 “Hatton has been nothing but willing to work with us and to be transparent. And, I did not get that feeling from the last police department…I really feel like he came into this community wanting to see change, wanting to see effective change. That’s important to him, and I think that has come across … I appreciate his willingness to stand up for the rights of everybody,” said McBane.

She also said that if she could give advice to anybody regarding marches or demonstrations such as the ones in Sylva, it would be to do their research. There are permits that need to be obtained, as well a need for a network of people. She said that communication between everyone involved is crucial.

This is true when it comes to the Qualla Boundary as well. When asked about any potential demonstrations, Alica Wildcatt, of the Cherokee Indian Police Department said that they would need to file for the proper permit or else the act would be unlawful. She sited Section 167-1 of the Cherokee Code. 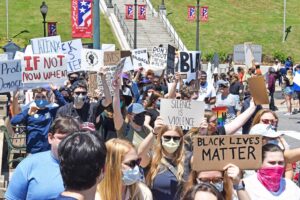 Radonna Crowe, EBCI Public Health and Human Services public information officer, said she hopes that an event of this sort would take into account community safety.

“If an individual plans to protest, due to the increase of COVID-19 cases in our community, we ask that they: wear a cloth face covering, use hand sanitizer, keep at least six feet apart from others stick to small groups that they have been quarantined with, stay hydrated and stay safe. When the event is over get tested/re-test for COVID-19,” said Crowe.

For more information regarding COVID-19 and testing, you can call the CIHA Hotline 497-3743.

Principal Chief Richard G. Sneed has been preparing for protests in the area. He recently discussed his views in a commentary with the Cherokee One Feather.

“Those of us who have suffered the trauma of oppression will no longer tolerate the oppression of our friends, our neighbors, or our fellow citizens. We cannot allow this message of truth to be lost in noise, chaos, and violence. It is incumbent upon each of us to exercise our right to free speech to make this truth known. But to be successful- to actually get others to listen to us- we must remember that meaningful and respectful dialogue will be the mechanism for change,” Sneed continued.

When it came to the event in Sylva, Police Chief Hatton said he came into the event prepared for peace. He said they intentionally wore a more relaxed uniform and that he gave a talk to his team beforehand. He said that afterward all his officers were encouraged by the support at the event. That they lost count of the ‘thank yous’ they received, and that it was a great experience for everyone involved. Hatton continued by saying that he wishes to maintain the level of mutual respect moving forward.

“What I told [the organizers] was, ‘I’m giving you my word. My officers are not here to slow down anything you’re doing. In fact, they’re here to protect what you’re doing. Even though some people may see police presence as a form of control, what we’re actually here to do is to make sure you get to have your voice and you get to say what you want to say. And that nobody else stops you from doing that.”