“Many Faces” mask exhibit opens at Museum of the Cherokee Indian

Anew exhibit at the Museum of the Cherokee Indian, called “Many Faces”, features the ancient art of Cherokee mask making in a modern realm and will inform visitors of this art form still practiced by some artists of the Eastern Band of Cherokee Indians (EBCI). 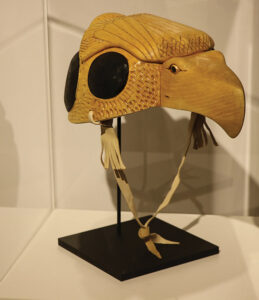 A head covering Bird Prayer Mask by the late John Julius Wilnoty, an EBCI mask maker, is shown in a new exhibit at the Museum of the Cherokee Indian called “Many Faces”. (SCOTT MCKIE B.P./One Feather photos)

Incorporated in the exhibit is a work station space where mask makers will be able to demonstrate their art for the public and speak with the visitors.

“There are over 150 masks in the exhibit; a few from the Museum’s collection, but most of them were submitted by community members,” said Dakota Brown, Museum of the Cherokee Indian education director, who co-curated the exhibit with Tyra Maney.

“Those community members that submitted their own work, or pieces of their collections, made this exhibit possible,” said Brown.  “We have almost 50 different artists represented.  Some of the makers have passed on, and their masks are probably around 100 years old.”

Statements from some of the living artists are emblazoned on the walls of the exhibit.

“I aspire to be the carvers of old,” said Michael H. Crowe.  “Where they don’t need to sand it.  To have all of those individual chisel marks or cuts with your knife.” 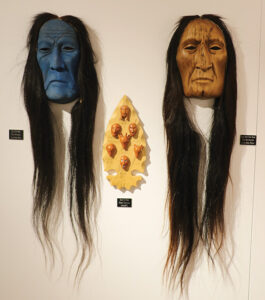 Cameron Nelson, a recent graduate of Cherokee High School and the youngest of all of the mask makers in the exhibit, was quoted, “It’s about our culture and keeping it alive, why its important, and it’s something that’s been carried on from generation to generation and it’s dying out.  I’d like to continue carrying it on.”

Maney, Museum cultural specialist, noted, “Masks are a very intriguing and unique aspect of our culture.  They have been used for hundreds of years, and the tradition was almost lost in the mid-1900s.  I’m glad the tradition has continued and that visitors will be able to see the evolution of our mask culture.”

Dawn Arneach, Museum interim executive director, said, “Everything just fell into place for us and this mask exhibit.  Within the last six months, masks have been donated, loaned, and repatriated back to the Museum.  It just made sense that our new exhibit would feature Cherokee masks.” 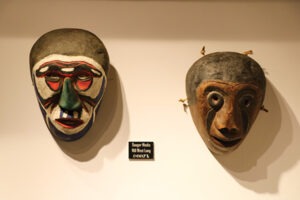 Booger masks by the late Will West Long.

“I truly believe people will come out of the mask exhibit with a new understanding of Cherokee masks, the mask makers, and the generations that continue this art form.”

Brown commented, “Traditionally, each mask was created for a specific ceremony.  They are art, yes, but they were meant to be used and each mask is a ceremonial object.  I would love to see Cherokee people using them again, dancing with them again, and not for tourists, but used the way the way they were intended.”

The exhibit is partially funded by the Cherokee Preservation Foundation.