Following are important dates and events relating to the Eastern Band of Cherokee Indians’ (EBCI) response to the coronavirus (COVID-19):

– First person in the State of North Carolina tests positive for COVID-19.

– Tribe forms EBCI Joint Information Center (JIC) for the purpose of disseminating information about COVID-19 to the public. 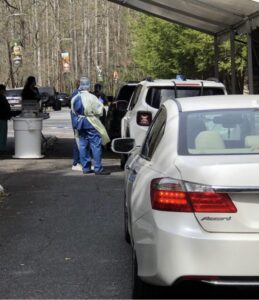 Cars are lined up at the drive-thru COVID-19 testing site on Drama Hill Rd. for a preliminary test of the process on Monday, March 30. (Photo courtesy of Cherokee Indian Hospital)

– Principal Chief Richard G. Sneed issues a Declaration of a State of Emergency for the EBCI.

– Chief Sneed issues Executive Order No. 3 ordering all restaurants on tribal lands of the EBCI to close their dining rooms.  Take-out, delivery, and curb-side services were still allowed.

– Chief Sneed issues Executive Order No. 4 mandating the Cherokee Food Lion “to limit beef, pork, and chicken, sanitizing products and paper products”.  The Order also established a senior citizen hour in the morning for safer shopping for that population.

– The EBCI tribal government moves to a four-day work week and all lobbies to tribal buildings would be closed until further notice.

– Chief Sneed issues Executive Order No. 6 closed all EBCI tribal offices and suspended tribal operations.  It also closed all “non-essential” businesses on EBCI tribal lands. A stay-at-home order was included. It also suspended all church services, and ordered road blocks to be installed to all entrances to the Qualla Boundary.  At this time, the Boundary was closed to everyone except EBCI tribal members and residents of the lands, and essential EBCI tribal employees.

– Cherokee Central Schools announces it was closing all public school buildings until May 15.

Vickie Bradley, Secretary of PHHS, speaks in front of community stakeholders at their called meeting on Monday, March 2 to discuss the coronavirus. (JONAH LOSSIAH/One Feather photo)

– Great Smoky Mountains National Park announces it was closing all Park areas, except the Foothills Parkway and the Spur near Gatlinburg, Tenn.

– Chief Sneed issues Executive Order No. 8 which established a curfew for the Qualla Boundary from 10 p.m. to 5 a.m.  It also limited the hours of operation for Cherokee Food Lion to 7 a.m. to 9 p.m.

– The EBCI Joint Information Center (JIC) reports the first case of COVID-19 on the Qualla Boundary.  The person was a part-time resident who returned to their home state.

– Harrah’s Cherokee Casinos announces temporary closure of facilities would extend through the end of April.

– Tribal Council approves legislation (Res. No. 171 – 2020), submitted by Chief Sneed, which provided a stimulus package to local businesses as a result of the COVID-19 closures.

– Chief Sneed issues a memorandum closing the checkpoints in the Birdtown and Wolftown communities between the hours of 6 p.m. to 6 a.m. in an effort to give relief to those personnel working those.

– Tribal Council approves a $100,000 donation, from the EBCI General Fund, to go to the Navajo Nation which has been hit hard by COVID-19.  The donation, according to the legislation passed, was “for the purpose of immediate medical and community needs”. 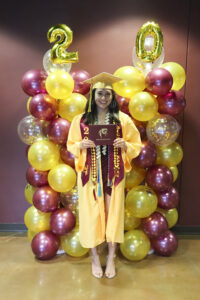 – Cherokee Central Schools closes all public school buildings for the remainder of the academic year.

– Chief Sneed issues a memorandum waiving rental fees to Qualla Housing and EBCI Housing & Community Development for the month of May, halting all evictions and foreclosures for 60 days, and deferring mortgage payments for the month of May to the end of each mortgage.

– Chief Sneed issues Executive Order No. 11 which called for the removal of all checkpoints on May 8.  It also made the wearing of cloth face coverings in public mandatory.  Churches were allowed with this Order to resume services at 20 percent capacity.  Checkpoints were installed with this Order at the Cherokee Food Lion plaza limiting entrance to residents of the Qualla Boundary only.  The Order also lifted the tribal curfew; opened the Cherokee Enterprise Waters to non-tribal members; and called for the opening of the Fire Mountain Trails, Cherokee Skate Park, and Oconaluftee Island Park to the general public on May 15.

– U.S. Secretary of the Interior David Bernhardt visits Cherokee and toured tribal testing sites as well as met with officials at Cherokee Central Schools.  He delivered 1,000 cloth masks for the Tribe.  “What we’ve learned as we’ve gone is that there are a lot of asymptomatic folks,” he said.  “So, one of the things a person can do, not to prevent getting infected but to prevent exacerbating the spread, is to wear a face covering.” 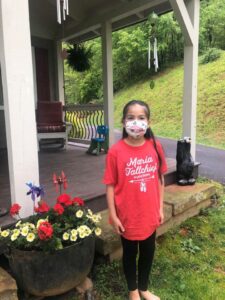 Little Miss Cherokee Georjia Girty is shown wearing red and her MMIW mask, made by Sew Tsalagi, in honor of the National Day Of Awareness for Missing and Murdered Indigenous Women and Girls on Tuesday, May 5. (Photo by Consie Girty)

– Chief Sneed issues Executive Order No. 12 which allowed for the resumption of retail establishments, campgrounds, and hotels on EBCI tribal lands at 50 percent capacity starting May 15.  It also opened many outdoor areas on the Qualla Boundary to the general public on May 15.  The Order also announced the re-opening of the EBCI tribal government and operations at full capacity on June 8.

– Great Smoky Mountains National Park begins a phased re-opening which opened many of the major roads and areas, including Newfound Gap Road through the Park from Cherokee to Gatlinburg, Tenn.  Campgrounds and Visitor Centers remained closed. 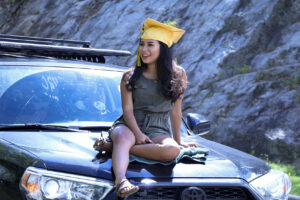 Malia Davis, Cherokee High School Class of 2020, rides in a graduation parade through downtown Cherokee on the afternoon of Thursday, May 28. The parade preceded the graduation which was held, in a modified format, at the Chief Joyce Dugan Cultural Arts Center. (SCOTT MCKIE B.P./One Feather photo)

– Chief Sneed issues Executive Order No. 14 which extended the checkpoints at the entrances to Food Lion to May 31.  It also lifted the cloth face covering requirement in public with the exception of patrons at Harrah’s Cherokee Casinos.

– Cherokee High School holds modified graduation for its seniors including a parade through downtown Cherokee and a diploma ceremony in the Chief Joyce Dugan Cultural Arts Center.

– Community spread of COVID-19 is confirmed by Chief Sneed and Casey Cooper, Cherokee Indian Hospital Authority chief executive officer.  A total of  nine new cases were reported by the EBCI JIC from May 31 – June 1 bringing the total as of June 1 to 28 cases.