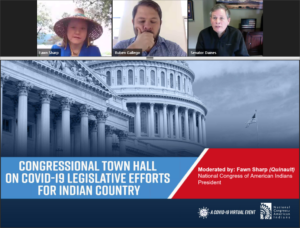 After brief introductions, President Sharp yielded the floor to Sen. Daines who was called on to speak first because he needed to get to another engagement. He expressed his disappointment at not having any relief for Indian Country in the first two national COVID-19 relief packages.

In the third package, Congress passed $8 billion for Indian Country relief. He said he was shocked that, with a diabetes rate twice that of the national average, Native Americans were left out of the first and second wave of assistance against COVID-19. Diabetics were identified as a group more prone to extreme complications from the disease. Sen. Daines also said he has always admired the priority that Indigenous peoples put on elder care.

Congressman Gallego said that the federal government has a history of neglecting its obligations to Native American tribes, particularly in times of emergency. He mentioned that he advocated and is an advocate during the recovery phases of the country from COVID-19 for tribal casino operations losses to be included in the accepted uses of the recovery dollars.

Sen. Smith agreed with Congressman Gallego and said that the U.S. government must recognize tribal governments as sovereign entities. She said while it is a positive step to allocate the $8 billion in the CARES Act to Indian Country, tribes are not able to use the funds to replace lost revenue from their gaming operations. She added that the U.S. needs to live up to its treaty responsibilities.

Congressman Gallego reiterated that tourism and gaming for Indian Country should be supported as a national recovery is organized. Infrastructure updates should be considered as new legislation is approved.

Sen. Smith asked, “How do we build back stronger?” She said that specific strategies need to be developed for tribal energy and housing. “We need to improve access to capital for Indian businesses.”

President Sharp said that governmental red tape was a difficult challenge to tribes. From either lack of knowledge or reluctance to prioritize, federal governmental departments delay aid that is already approved for use in Indian Country by the U.S. Congress. She asked what can be done to relieve the system of departmental barriers.

Congressman Gallego said that there is a need for redundancy in law as legislation is created to make clear to departments the intent of Congress for the use of the funds. He also stated that the U.S Government has a trust responsibility to maintain a certain level of support. Sen. Smith said that there is a need for additional Congressional oversight to ensure that the funds Congress allocates are spent as intended.

Sen. Smith said that the next bill should have additional protections for elders. Both for the COVID-19 emergency and general health care, medical infrastructure must be improved. Her example was the current focus in the U.S. for elders to use tele-medicine in place of doctor visits and general health care for the elderly. Sen. Smith said that in most reservations and trust lands, broadband internet access is spotty or non-existent. Elder care needs to be addressed in a realistic way. Congressman Gallego added that digital infrastructure must be improved across Indian Country.

Regarding streamlining the process of getting support to the tribes, Congressman Gallego stated that the best way to work at the federal and state level is to over-communicate. He felt that tribes do not always have good relationships with the municipalities that surround them or that they reside in, so the best, quickest way for federal allocations to get to the tribes is for it to either flow directly from the federal government or to be appropriated through the state governments.