The 10 riders representing the Eastern Band of Cherokee Indians (EBCI) on this year’s Remember the Removal ride are continuing their training during the current COVID-19 quarantine situation.  The ride, set to begin in early June at New Echota, Ga., is still on as scheduled as of press time. 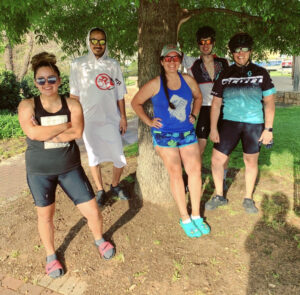 Some of the riders are shown, left to right, on a recent training ride including: Shayla Jackson, Bear Allison, Laura Blythe, Drew Johnson, and Emra Arkansas. (Photos contributed)

“Being quarantined hasn’t negatively impacted my training,” said Blythe.  “If anything, it has been a blessing.  We have more time to ride.  The cars on the road are a lot less, and in town most people have been very courteous with sharing the road.  If anyone is thinking about getting into the bike life, now is absolutely the time.”

Ledford noted, “Training is going as well as can be expected.  Personally, I have had a few difficulties, especially early on getting rides in with the team.”

Ledford works with the EBCI IT department and has put in a lot of extra hours in the past few months in the wake of December 2019’s cyber-attack against the Tribe.  “I was also essential personnel for a good portion of our ongoing quarantine and have been riding a lot on my own during this time as well.  We surely have not had the opportunities to work together as much as we’d hoped, and although we are a team and we love each other as teammates I do feel we have been affected negatively by the quarantine.” 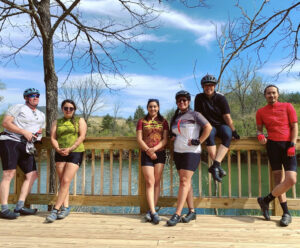 Some of the riders are shown, left to right, on a recent training ride including: Ethan Ledford, Shayla Jackson, Raylen Bark, Laura Blythe, Emra Arkansas, and Bear Allison.

Bark, a graduating senior at Cherokee High School, has been trying to work training into her schedule which now involves finishing her high school career remotely.  “Many of  our big training rides have been cancelled.  Corlee (Thomas-Hill) isn’t allowed to schedule any group rides, and we aren’t allowed, of course, to ride in groups over 10.  We’d ride some with the alumni, and now we aren’t able to…I don’t think we’ve had a training ride with the whole team since social distancing started.”

Johnson said, “Personally, my training has been going pretty smoothly averaging nearly 100 miles a week at its peak and operating in groups of two to seven.  Overall, it has been a fairly positive experience with less vehicles on the roads.  I just constantly wonder if we are taking the correct precautions despite the situation.”

He added, “Currently, we have been practicing social distancing, and a few of the rider’s family households have been tested (for COVID-19).” 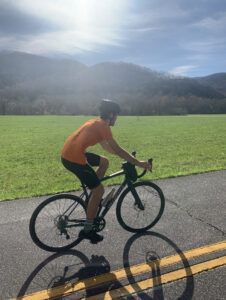 Drew Johnson is shown on a training ride.

Of her training, Blythe noted, “I am training four to five days a week with variations in the routes.  I try to allow for tough rides, with a lot of elevation, and also easier rides for recovery.  In one way, it is really hard to train or plan for training on my own because I’ve never been in the cycling world prior to January.  On the other hand, I know some great people who have offered a lot of help with route-planning and also taking time to ride with us to show us new areas.”

She added, “Bear (Allison) has also been a really great teammate who has helped all of us with training and learning to ride since the very beginning.”

Many of the riders have been bulking up their training regimens with other activities and exercises.  Johnson said he has been running, mountain biking, hiking, and doing yoga.

Blythe said, “I have incorporated yoga, upper body and core workouts and hiking/walking into my weekly activities.  My diet has changed to fresher whole foods, and my water intake has increased immensely while my sodas have been reduced.  On occasion, I’ll have a little Pepsi though.”

Bark noted, “A lot of us cross train.  We’ll go mountain biking – a totally different concept from road biking.  We’ll ride the Fire Mountain Trail a lot.  We had circuit workouts, but of course it stopped when the gyms closed.”

Ledford said he has been utilizing equipment in his home gym.  “I personally have several pieces of workout equipment that I can use.  I get some time in on the Bowflex, some dumbbells, and a cycling trainer that gets a few miles on it when the weather is bad.” 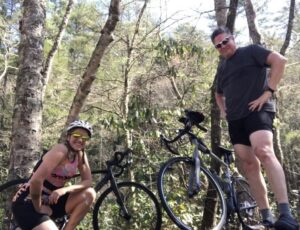 Ethan Ledford, right, a 2020 Remember the Removal rider, is shown training with his daughter Katelynn Ledford-McCoy.

The 2020 team has been able to get together in small groups to train, but they are adamantly adhering to current safety practices regarding COVID-19.  “When we do ride together, we always use hand sanitizer, we distance ourselves, and we definitely don’t share water bottles,” said Ledford.  “And, when our ride is done, we don’t hang out together.”

Blythe commented, “I have trained with several RTR teammates during this time.  We’re all in the same boat as for trying to stay self-motivated, learning to navigate unusual territory, and trying to reach our goal which is being 100 percent prepared to travel to Oklahoma.  We only go in small groups if we train together, less than 10 at a time.”

Due to the quarantine, the cultural, genealogical, and language instruction the team would normally get has been diminished greatly.  Blythe summed it up and said that due to the quarantine and bad weather days prior, the team has only had a handful of classes to date.  “This was the part I was most excited for coming into this program and feel that we have missed so many important pieces which make this experience great.”