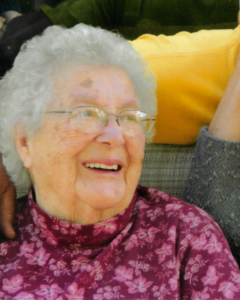 Rebecca Owl Boyum passed away peacefully on April 6, 2020 following a brief illness.  She was preceded in death by her father, George Owl Sr.; her mother, Rebecca Pond Owl; her brothers, Hillary Osborn and George Owl Jr.; her step-father, Harold Pond; her step-brothers, Harold, Pete, William, and James Pond; and her son, Thomas Boyum.

She was born on April 27, 1923 in the Ravens Ford section of the Big Cove Community on the Cherokee Indian Reservation.  Following the death of her mother, she was adopted by her mother’s brother Harold Pond in North Dakota, where she was raised. She attended the University of North Dakota (UND) and was a member of the Gamma Phi Beta Sorority.  She also met and married Dr. Lowell E. Boyum while at UND.  She graduated from Minnesota State Teachers College in 1943.

She lived and raised her children in North Dakota before moving to Cherokee in 1977, where she taught at the Cherokee Elementary School and the Oconoluftee Job Corps.  She was a gifted teacher and was most proud of the many of students she taught to read and write.  She was an educator her entire life and taught her final and most favorite student, EBCI (Eastern Band of Cherokee Indians) member Joseph Smart, to read when she was nearly 90.

She was the oldest member of the American Legion Auxiliary, Steve Youngdeer Post 143, Cherokee, and had been awarded an Honorary Life Membership by them.  She attended First Presbyterian Church in Bryson City.  She loved to paint, read, garden, attend yard sales, listen to old country music ,and watch Carolina basketball.  She was a beacon of light for all who knew her.

She encouraged her four children to attend school and all four received doctorate level degrees, a rare achievement for any parent.  She is survived by G. Peter Boyum MD of Stillwater, Minn.; Thann R. Boyum DVM of Columbus,  and William “Bill” Boyum, Chief Justice of the Cherokee Supreme Court (Ret.).  Her son, Thomas Boyum DDS, predeceased her.  She is survived by two grandchildren, Andrew Boyum of Minneapolis, Minn. and Holly Boyum, who is attending medical school in Detroit, Mich.  She is also survived by her sister, Evelyn Legassey of Sylva, and her children, Cate Hurt, Everette Legassey, Bonnie Legassey and great nephew, Robert LaPlante.

Because of the COVID virus, there will be no visitation or funeral services.  A celebration in honor of her life will be held later this year.