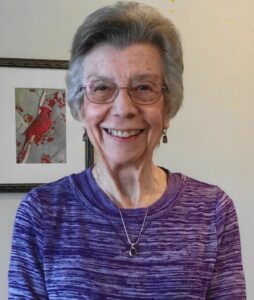 Joan Hope Nichols Edmonds passed away on April 15, 2020 in her home. She ended her nine-year battle with pancreatic cancer. Joan was born in Tenino, Wash. on Feb. 24, 1939.

Most of her life was spent in western North Carolina. She grew up in Bryson City, raised her family in Maggie Valley, and lived several years of her retirement in Asheville. She is survived by her husband of 55 years, Thomas Glenn Edmonds, a native of Asheville. She also leaves behind two loving daughters, Hope Edmonds Bridges (Steven Bridges) and Holly Edmonds Brigman (Todd Brigman), both of Statesville. Her two granddaughters were the absolute center of her heart, Melina Hope and Mavis Hope, both bearing her name beautifully. Joan is also survived by her dear sister, Ann Hooper of Cullowhee.

Joan was a brilliant woman, passionate about education. She graduated from Swain County High School in 1957, completed her bachelor’s degree in 1961 and obtained her master’s degree in education in 1980, both at Western Carolina University. Joan used her education well, devoting her life to helping countless students discover their own brilliance and talents. Those she taught often said Mrs. Edmonds was a life-changing influence in their lives. She believed the best in others and treated them with respect and dignity. She embodied the Golden Rule. She began her teaching career in Marion teaching science at Marion High School from 1962-66. Then, she and Tom moved to Asheville, where she taught at Owen High School 1966-68.

In 1968, she began her long tenure in Cherokee, starting out teaching Kindergarten. In the 30 plus years that followed, she was a teacher and assistant principal at Cherokee High School. Her years in Cherokee made an indelible mark in her soul. There are few families whose lives she did not touch. A former student from Cherokee recently said the following at the news of her passing, “She told me she was proud of me each and every time I saw her or spoke to her. She really did care for us. She was someone, as you know, who didn’t see color or race. That is why she was so loved. She taught me the way.”

And, she also taught her family the Way. She taught us to love one another, forgive as the Lord forgave, serve others, be humble, and do your absolute best. In her final years, she thrived in the role she was most meant to play this side of heaven… Nana to Melina and Mavis. Both girls are honored with the gift of her middle name, Hope. And, hope is what Joan found and held to throughout her life. And in her long battle with cancer. She chose to fight and never gave up. Instead, God called her home to give her eternal rest and healing. And in His hope, we can find rest until we see her again.

Funeral services will be held Sunday, April 19 in the Troutman Funeral Home Chapel. Burial will be held in the Western Carolina State Veteran Cemetery.

Online condolences may be made to the family at www.troutmanfuneralhome.com