District Attorney Ashley Hornsby Welch’s office secured the conviction on Monday, April 13 of an Otto man who played a key role in a large-scale methamphetamine operation to ferry drugs from Atlanta, Ga. into Macon County. 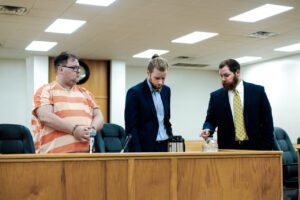 Kenneth Wayne Underwood, 51, pleaded guilty to trafficking in methamphetamine. He was sentenced as part of a negotiated plea agreement.

Underwood will serve at least 225 months and up to 282 months in prison. He received credit for time served, 369 days of pretrial confinement.

“The defendant attempted to build a methamphetamine pipeline into Western North Carolina,” Welch said. “Thanks to great work by the Macon County Sheriff’s Office and members of my office, we were able to ensure Mr. Underwood, rather than profiting from dealing drugs, instead spends a lengthy amount of time in prison.”

Two other Macon County residents, Nikki Wykle and Teresa Burch, were arrested by Macon County Sheriff’s Office on April 10, 2019, as part of a drug sting at Wykle’s house on Cat Creek Road.

Deputies stopped a vehicle seen leaving the residence and arrested Underwood and Burch after seizing more than 2 pounds of methamphetamine. The drugs had an estimated street value of at least $90,000.

Wykle is charged with trafficking methamphetamine by possession, two counts of conspiracy to traffic methamphetamine, habitual felon indictment and maintaining a dwelling for controlled substances. She is being held under a $2.5 million secured bond.

Burch pleaded guilty to sell/deliver methamphetamine and attempted trafficking. A judge sentenced her to probation; subsequent probation violations are scheduled to be heard in court June 1.