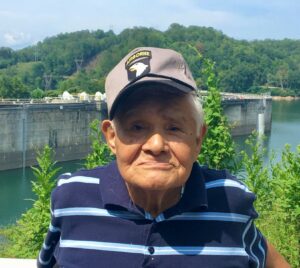 Samuel Watty, 84, born April 22, 1935 went to his Heavenly home on Thursday, Dec. 12, 2019 following a brief stay at the Cherokee Indian Hospital. His loving family was by his side.

Samuel Watty served in the Army from 1956-62 and exited the service as a PFC-2 and had been part of the 59th Ordnance Brigade and had been stationed at Ft. Carson, Colo. He was in the reserves for four years with an additional two years of active duty. After leaving the service, Samuel began working as a construction worker up until his retirement.

He is proceeded in death by his parents, Stephen and Rachel Watty, as well as his wife, Elsie Watty.

In addition to them he will be welcomed to Heaven by his daughters, Mary Montelongo, Anna Louise Watty, grandson Michael Montelongo and Fabian Reed; his brothers, Quincy, Johnny, Joseph and Anderson Watty; along with his sisters, Yonnie, Winnie, Lorrene, and Nannie Sue who will be overjoyed to be reunited with him in Heaven.

Sam had a special companion, who stayed by his side, made him smile and cheered him up, that will also be left behind and mourn Sam’s passing, his special pet companion, Gweedo.