Ron Porter gives everything he can

This year, Ron Porter made sure that Christmas came a week early in Cherokee.

As he has for the last several years, Porter made the multi-hour trek from Cullman, Ala. to Cherokee to deliver a sizable amount of clothes to Ric Youngblood’s Smokeshop. He makes this trip twice a year, once in May and once in December. Porter says that he also takes a shipment up to Pennsylvania every July as well. 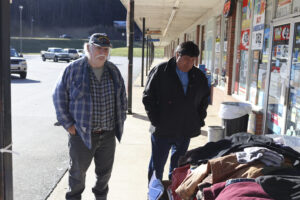 Ron Porter, left, brings donations of clothes, which are distributed at Ric Youngblood’s Smokeshop, for the Cherokee community. He is shown with Rick Bird, owner of the Smokeshop, on the morning of Wednesday, Dec. 18. (JONAH LOSSIAH/One Feather photo)

“I do it because people need to,” said Porter, who is also a veteran of the Vietnam conflict, serving from 1973-75.

Porter first met Richard Bird, a member of the Eastern Band of Cherokee Indians (EBCI) and the owner of the Smokeshop, at the Annual Multicultural Indian Event held at the Oakville Indian Mounds Education Center in Danville, Ala. Bird has represented the EBCI at this event for years, and this is when he was introduced to Porter. They both racked their brains for a date, but guessed that was about a decade ago. However, they became close a few years later, and it all started with one shirt.

“He volunteered to bring in our eagle staff,” Bird said.  “We didn’t have a veteran to do it at the time. So, I worked with him and told him what to do and he carried the staff all weekend. At the end of the weekend, I was gifted a shirt by Don Eagle, a former WWF professional wrestler. He (Porter) liked my shirt so I gifted it to him, and in turned he gifted me his friendship.”

Bird told Porter of the struggles of some families on the Qualla Boundary, and so he decided to help in whatever way he could. Porter started talking to members of his community, and gained support from auction houses, churches and individuals in his local area in Alabama. The next year, Porter gave Bird a load of clothes to take home to distribute to the Cherokee community. Bird did so, and set up a stand outside of his Smokeshop.

“What we generally do is take it to the senior citizens first and let them have first pick, and then we take it and put it out here for whoever needs it,” said Bird.

This was how they operated for the first few years, but over the past three years Porter has made the delivery himself.

“He’s just really giving. You would think the man would be a millionaire, but he’s not.   The stuff he brings is top notch, and he don’t even ask for gas money,” said Bird.

“I’m that close to being homeless myself right now,” said Porter.

Porter says that he just wants to help people, and that Bird is giving him an opportunity to do just that. He continued by saying the he has become very attached to this community, and looks forward to coming to Cherokee each time.

“I feel closer to Ric and everybody here than my own family,” said Porter, who has pictures of Bird and his family with him in his pocket.

Twice a year, he pulls up to Ric Youngblood’s Smokeshop in his Chevrolet Equinox. He manages to stuff hundreds of articles of clothing in that car.  On this trip, he brought at least six bags and six boxes full of shirts, pants, shoes, jackets and stuffed animals.

Bird and his employees say they look forward to it every year, as well as plenty of the community.

“My favorite story is the lady whose house burned down, and they got kids clothes for all her kids. That was about three years ago,” said Daily Hutcherson, who was helping set up the table Wednesday morning.

Porter says that all he wants to do is help people, and that he appreciates the support that has been provided to allow for him to do this every year. Money doesn’t matter to him, and he’ll take as much time as needed to get this done. He simply wants to provide all he can.

“If I can help a family out. Like I said, I’m pretty close to being homeless. I don’t care. Something will happen,” said Porter.