An educator in his 33rd year of teaching received an award for those dedicated in service to Cherokee youth at the 33rd Annual Frell Owl Award Presentation.  Michael Yannette, Director of Choirs and Musical Theatre at Cherokee Central Schools, received the award during the annual banquet held at the Chestnut Tree Inn on Wednesday, Dec. 18. 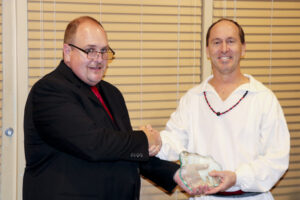 The Cherokee Chamber Singers, under the direction of Yannette, performed during the awards banquet and before the announcement of the winner.  He is hugely responsible for the growth of the choir program and the creation of the musical theatre program at Cherokee Central Schools.

When his name was announced, Yannette showed true shock.  “I never, never thought for a million years that I was coming here to get this award.  I can’t tell you how much I appreciate this.”

He went on to say, “I’ve been teaching for 33 years.  I’ve never stayed so long in one school.  I’ve never loved students so much…I love teaching my kids.  I truly love those kids, and I’m so grateful.  Thank you so much for this.  This was completely unexpected, and it is completely, joyfully accepted.”

Principal Chief Richard G. Sneed commented, “It cannot be understated the impact that educators have on all of our lives.  I think every one of us, if we look back, there’s a teacher or a coach, a mentor, who has had a positive impact on who we are and the people we are today.” 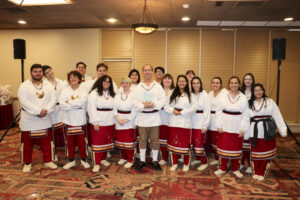 Yannette, front and center, is shown with his students from the Cherokee Chamber Singers.

He praised Yannette’s work with the Cherokee students.  “I’ve sat in the audience, wiping tears away, at just the amazing gift that this man has drawn out of these young people.”

Chief Sneed added, “Michael, you will never know, this side of eternity, how far reaching your life’s work has shaped the lives of our young people.  It is not only your expertise, your excellence and passion, but because of the love for and the belief in every one of your students that all of this is made possible.  Because of your unyielding commitment to our children, future generations of Cherokee families will always have a song in their heart.”