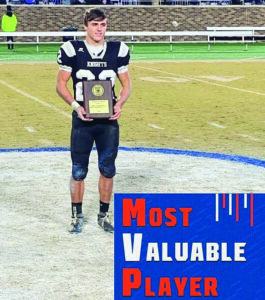 Robbinsville’s Rylee Anderson was named the Most Valuable Player in Saturday’s game. He scored five touchdowns in the 45-14 victory for the Black Knights. (NCHSAA photo)

Rylee Anderson was the star for Robbinsville scoring the game’s first three touchdowns to push his team out to a 21-0 lead with 9:02 to go in the second quarter. Anderson cashed in two additional runs in the second half on his way to a fantastic 34 carry, 176 yard and five score stat line. He was named the game’s Most Valuable Player.

Robbinsville also had a great rushing performance by Lex Hooper who carried 14 times for 125 yards including his 20-yard run to put Robbinsville up 38-14 early in the fourth. While the rushing attack was dominant for the Black Knights, their defense played exceptionally, only allowing the Jaguars 65 yards via the ground and 53 through the air.

Northampton County got on the board in the third quarter with Na’Jae Newsom hauling in a 23-yard scoring pass from Zion Kendall. Just over two minutes later Kendall broke free for a 15-yard touchdown run. The Jaguars finished the season 11-4, they were 5-1 in the Tar Roanoke 1A Conference. Northampton County reached the state championship for the first time in school history and only the second time any school from the county made it to the finals, matching the 2005 team from Northampton-West.

Robbinsville wrapped up the year 15-0, they were 6-0 as the champions of the Smoky Mountain 1A Conference. The Black Knights made the program’s 17th appearance in an NCHSAA state championship game.