When the Charles George Memorial Arena is as full as it was on the evening of Tuesday, Dec. 10, you know it is either a playoff game or rival Swain County has come to town.  The latter was the case as the Cherokee varsity basketball teams opened their 2019-20 Big Smoky Mountain Conference campaigns.  The Lady Braves (2-2, 1-0 BSMC) got things going with a big 73-47 win.  The Braves (2-1, 0-1 BSMC) started out well but fell short in the end 80-69 to the Maroon Devils.

Swain County started out quickly in this game and jumped out to a 4-0 lead early on, but the Lady Braves got it going and ended up leading 15-12 at the end of the first period.  Three minutes into the second, Cherokee led 23-20 and then went on an 11-5 run to lead 34-25 at the half. 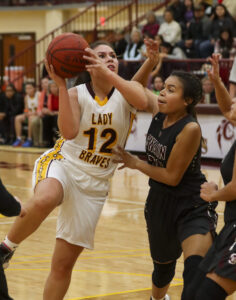 Cherokee’s Naomi Smith goes inside for a shot as Swain County’s Rabekka Wolfe defends during a game at the Charles George Memorial Arena on the evening of Tuesday, Dec. 10. Smith finished the game with 7 points as the Lady Braves cruised to a 73-47 win. (SCOTT MCKIE B.P./One Feather photos)

The third period was all Cherokee, and the Lady Braves went on a 10-1 run in the first three minutes.  For the period, Cherokee outscored Swain County 21-7 to take a commanding 55-32 lead at the end of the third.  Cherokee kept cruising in the fourth en route to a large 73-47 win.

This game started out very slowly for both teams with Cherokee leading 1-0 after the first two minutes.  With three minutes left in the first period, Cherokee had built a 15-7 lead and they led 20-14 at the end of the first.  Cherokee kept a 5- or 6- point lead through the first six minutes of the second period.  Swain took the lead with just over two minutes left before the half and led 29-26 going into the locker room. 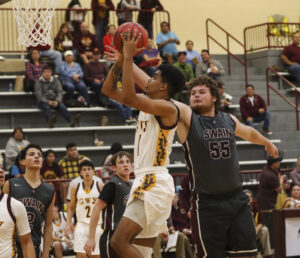 Cherokee’s Chris Johnson goes inside for a shot as Swain County’s Nick Millsaps defends during a game at the Charles George Memorial Arena on the evening of Tuesday, Dec. 10. Johnson finished the game with 7 points as the Braves fell to the Maroon Devils 80-69.

Swain County kept their double-digit lead for the majority of the fourth period.  With just under three minutes remaining in the game, the Braves caught fire and went on an 8-1 run only trailing 71-65 with 2:38 left.  But, several missed shots at the end cost the Braves and Swain County held on for the 80-69 win.