The Cherokee Braves and Lady Braves varsity basketball teams didn’t disappoint basketball fans during their home opener games against Franklin at the Charles George Memorial Arena on the evening of Thursday, Dec. 5.  The Braves (1-0) battled back-and-forth with the Panthers and held on at the end for a 77-73 win, and the Lady Braves (0-2) overcame a large first period deficit to only fall short by two at the end (67-65) to the Lady Panthers.

Cherokee came out flat in this game and fell behind early.  With just over three minutes left in the first period, the Lady Braves trailed 21-0.  Deante Toineeta, who led Cherokee on the night with 23 points, got the ball rolling as she hit a three-point shot at 2:32 in the first.  She followed that up with a steal on the ensuing in-bounds pass which she turned into two points on a quick lay-up. 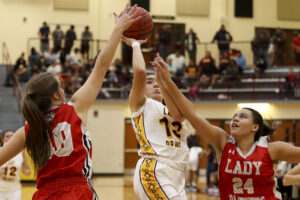 Deante Toineeta (#13), Lady Braves junior guard, goes for a shot over Franklin’s Makayla Brewer, left, and Sydney Williams during a game at the Charles George Memorial Arena on the evening of Thursday, Dec. 5. With 23 points, Toineeta led Cherokee in a 67-65 loss to the Lady Panthers. (SCOTT MCKIE B.P./One Feather photos)

Cherokee trailed 26-10 at the end of the first.

Franklin was able to keep the double-digit distance during the second and led 42-28 at the half.

The Lady Braves came out in the third period a different team and put the pressure on the Lady Panthers.  Within two minutes, Cherokee cut Franklin’s lead to six points (46-40), and they outscored the Lady Panthers 20-10 in the period to only trail 52-48 going into the final eight minutes.

The fourth period was tight with both teams exchanging baskets.  Cherokee actually outscored Franklin 17-15 in the final period but ended up two points shy in the end.

Franklin was led by Sierra Wade with 19 points followed by Sydney Williams with 12 and Neveah Tran and Tori Ensley who both had 9 on the night.  Other Lady Panthers scorers included: Chela Green 5, Canaan Drake 7, and Makayla Brewer 6.

The Braves started quickly in this game and built a solid 7-2 lead in the first few minutes.  Franklin settled in though and actually led by two points (13-11) at the end of the first period. 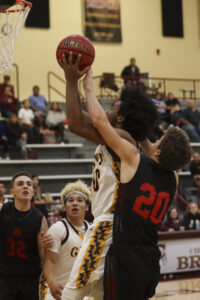 Cherokee’s Treannie Larch goes for a shot inside against Franklin’s Seth Crupi during a game at the Charles George Memorial Arena on the evening of Thursday, Dec. 5. Larch scored 9 points as the Braves edged the Panthers 77-73.

The Braves took the lead with just over two minutes left in the ball game and would never relinquish it holding on for the four-point win.