Ten members of the Eastern Band of Cherokee Indians (EBCI) have been selected to take the journey of a lifetime in 2020.  The Remember the Removal ride will retrace the northern route of the Trail of Tears from New Echota, Ga. to Tahlequah, Okla. during the month of June.

West, 42, a wrestling coach in Arkansas, said he spent over 20 years in the “Unto These Hills” outdoor drama, and said as a youth he’d always thought of riding to Oklahoma to retrace the Trail of Tears.  “One thing for me is to learn more about who I am and who my family is through the genealogy – and just the heartache that went on on the Trail of Tears.” 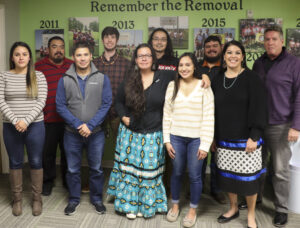 Ledford, 53, said his father, the late Vice Chief Bill Ledford, was a big proponent of cultural teachings.  “He traveled many times out to Oklahoma and always wanted culture and Cherokee language to continue to be taught in high school and beyond.  My grandfather’s name was McKinley Ross, and he actually went out to Oklahoma as part of the delegation that brought back the eternal flame…I just want to retrace their steps.”

He said he is also riding in honor of his daughter, Katelynn, and her husband, Kallup McCoy II.  “They are both recovering addicts and have a criminal record that precludes them from participating.  But, now that they’re clean and sober, they have become pillars of this community by giving, giving, giving…I am riding partly in honor of them too as well as my daughter, Amber, who is in the adult language class at New Kituwah and it is her passion and fervor to become a speaker and teach our kids to speak.”

Lambert, 32, commented, “I want to learn more stuff about what they went through so I can feel it too and I can bring it back to the young people – so I can explain to them what I learned.”

His older sister, Ahli-sha Stephens, went on the ride several years ago and was an inspiration for Lambert to try.

Blythe, 37, has been inspired by the groups of riders who have gone before.  “I thought this is something that I want to push myself to do and see if I can get my bike legs about me.  I think this is a great program.”

She added, “The Cherokee historical knowledge that you can get from it is something that I am very excited about.  It’s something that has sort of helped me to just jump into this.”

Bark, 17, a senior at Cherokee High School, said she’s been inspired to do the ride by several friends who rode several years ago including Darius Lamber and Nolan Arkansas.  “I saw everyone in the past and how it has affected them.  I’m hoping to gain a new family, more knowledge about the culture, and about our people and how this ride changed them but also empowered them.”

Arkansas, 37, said, “The alumni, the previous riders, provided inspiration.  Being able to hear their stories of camaraderie, personal growth, and spiritual growth is one of the things that I’m most looking forward to.  Knowing where our roots came from and who we’ve become along that journey.”

She said she is interested to find out how she turns out at the end of the journey.  “It’s that next plateau that I’m looking for – the spiritual growth.”

Shayla Jackson, 26, works at the New Kituwah Academy and said the students are an inspiration to her.  “They definitely inspire me to do a lot every day.  I kind of just push myself to be the best person I can be to show them that they can do anything that they want to do.”

She hopes to gain a deeper connection to her ancestors.  “I’ve seen a transformation in the people that I know that have done the bike ride, and I’d like to be a part of that.  I’d appreciate to have that deeper understanding and connection.”

Johnson, 20, was inspired to do the ride from his older sister, Carmen Johnson, who participated several years ago.  “She said it kind of changed her life, and she said ‘you just have to be there to experience it.’  It’s always been this sort of lingering mystery of what is it going to be like.”

He is hoping to gain further knowledge on the Trail of Tears.  “I grew up with a textbook knowledge as far as here’s the Trail, the Removal, Andrew Jackson – and, they didn’t really dive too much deeper into it.  I’ve done a little bit of research on the side on the history, but I feel that a lot is missing.  I’m really looking at this experience as a way to get educated on the topic so I can spread the correct knowledge and know more about myself and my family.”

Allison, 38, was inspired by Tonya Carroll who was a 2019 rider and actually began training with her.  “Her interest in doing it and all of the information that she brought home about it made me more interested in it.”

He said one main inspiration to him is to answer the question – why is the Eastern Band participating in this ride?  “I know there’s a lot of other people with the same view or perception of that.  The more I’ve learned about it, the more I’ve come to understand why we do it, and I want to go on that and help to change the perception of those who don’t understand why we do it.”

Allison said he is also looking forward to the physical challenge as well as the plethora of cultural and historical knowledge he will gain during the journey.

Myers, 40, commented, “Part of my family was removed to Oklahoma.  Some of them still live there.  Part of them escaped and came back on a couple of different occasions and ended up staying here.”

A large part of his reason for going on the journey is to encourage fellow tribal members to focus on their health.  “For all intents and purposes, I probably shouldn’t be here.  I had a kidney transplant.  A few years back, I was in full renal failure and had to be on dialysis for about a year-and-a-half.  One of my best friends donated a kidney so I’m riding for him, for that sacrifice.   I want to help promote a healthier Cherokee.  I think prevention is the best avenue.”

The riders will embark on their journey from New Echota, Ga. in early June and will arrive in Tahlequah, Okla. several weeks later.  The One Feather will publish their full itinerary following the official send-off event from Kituwah Mound which will be held several days before they start.

Johnson summed up the rider’s sentiments, “I think it’s going to be a beautiful experience.”