Several years ago, Cherokee students took to the stage and presented “Lion King Jr.” which was the first musical production in the history of Cherokee Central Schools (CCS).  Now, many of those same students – a lot of them now seniors at Cherokee High School, are revisiting the play for a set of upcoming performances.

“Our senior class this year is filled with kids that I have always called ‘The Trailblazers’,” said Michael Yannette, Cherokee Performing Arts program director.  “They started the Performing Arts Program at CCS when they were in middle school with ‘Lion King Jr.’  They have grown so much now and have had years of performing experiences in musicals and as part of the Cherokee Chamber Singers.” 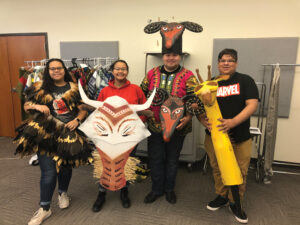 Growth is one of the major differences in this year’s cast.

“They were terrified of the whole thing five years ago,” said Yannette.  “Now, they are really talented and developed performers and are just killing it!  I’m really so proud of them and what they have achieved for themselves and their community.”

Acecia Lambert, senior, is reprising her role as Nala.  “It’s really interesting to be reprising the role because I never really thought that we would be able to do it again.  I thought it was just a one-time thing.  Now that we’re back and we can see the progress we’ve made, it’s more like deepening the relationship that I have with my character and finding out why she thinks the way she does.”

Logan Lequire, senior, played the part of the lovable Pumba in the original production, but this time around he is taking the villain role of Scar.

The differences in the two characters provide a challenge that Lequire is relishing.  “It’s definitely a completely opposite pole character from Pumba because you go from being the goofball to being the serious, maniacal bad-guy of the show.  It’s definitely a big change from what I was doing originally, but I’m just hoping to bring more of the deep, personal emotions to Scar rather than just being overpowering.  It’s more of a maniacal character.”

Silas Driver, senior, is reprising his role as Ed, one of the hyenas.  “When I first did this, I was kind of shy at that point – in a shell.  But now that I’ve had the experience of doing all of this, it’s opened me up to do what I couldn’t do back then.”

Staci Spicer, senior, is playing the part of Sarabi this time around.  During the first production, she worked more back stage and had a small part as a bird.  “I definitely work on processing their (characters) emotions and work on relating to the character more.”

Valerie Tissue was the original choreographer on “Lion King Jr.”, and she is back in that role for this production.  “This is my first year as a full-time teacher here, but five years ago when they first did this show Yannette called me and asked if I would come do the choreography.  It was their first musical ever.  They were great then, but the growth that has happened in just the short five years is amazing.  The choreography, and the level of choreography, and some of the intricate stuff we’re doing, never would have been possible five years ago.”

She added, “It’s a totally different ballgame.  They’ve grown so much.  To see how far the program has come and to be a part of it, I’m really proud.”

Yannette is very pleased with that end of the production, “The kids are so much more alive and capable as dancers and so the choreography is much more complex.”

“From five years ago when we were just papier mache and cardboard, because we really didn’t have a budget set up for this, to making more professional items, incorporating more Cherokee designs throughout the animals, it’s really fun to see where we were five years ago to now,” she said.  “We literally have the same play to compare it to.  And, it’s fun just watching how the students are going to interact with the puppetry and really put themselves into animal movements.”

Yannette praised the artistic design, “Megan Barnes has really upped her game in the creation of the Lion King animals from five years ago utilizing foam molding techniques that are producing incredible results.”

Community support for the Cherokee Performing Arts program has been constant and true since its inception.

“We have gotten a lot of community support throughout the past five years,” said Lambert.  “We wouldn’t be able to do it without them.  A lot of this is for them.  We’re reprising the roles because we’re graduating, but also because it’s a community favorite.”

Barnes said community support has been wonderful as well as support from CCS administration and the CCS School Board.  “Having the faith in us to have the students do something through the arts in multiple ways – dancing, singing, art, etc.  We get constant support from them.”

The students and production crew are all looking forward to people coming to see their latest production.

Lequire added, “Five years later, I still have people come up to me and remember all of us from the original production.”

Tissue noted, “It’s going to be huge for people who saw it before to come and see the growth that’s happened with the whole program.”