Many Native American tribes have used eagle feathers in various ceremonies and events since time immemorial.  Currently, only members of federally recognized tribes can legally obtain and possess eagle feathers per the ‘Religious Use of Feathers’ part of the Bald and Golden Eagle Protection Act and Migratory Bird Treaty Act.

The U.S. Fish and Wildlife Service is considering changes to the rules governing the possession of eagle feathers which would allow members of state recognized tribes and non-Indians with “sincere” religious beliefs to have them, and Principal Chief Richard G. Sneed and other tribal leaders of USET (United South and Eastern Tribes, Inc.) are in opposition. 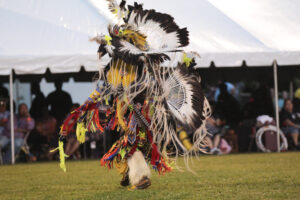 Wearing fancy dance bustles made of golden eagle feathers, JR Lonelodge, a member of the federally recognized Cheyenne and Arapaho Tribes of Oklahoma, dances at the 44th Eastern Band Cherokee Pow Wow in July. The U.S. Fish and Wildlife Service is considering changes to the rules governing the possession of eagle feathers which would allow members of state recognized tribes and non-Indians with “sincere” religious beliefs to have them. (SCOTT MCKIE B.P./One Feather photo)

According to USET SPF (Sovereignty Protection Fund) Res. No. 2020:013 submitted by Chief Sneed, “the FWS (Fish and Wildlife Service) has published a petition for rulemaking and request for public comment related to a petition submitted by an individual who claims membership in a state-recognize tribal nation and a religious organization that seeks to have the FWS amend the existing regulations governing the ‘religious purposes of Indian tribes’ exception in the Act (Bald and Golden Eagle Protection Act)…the petitioner’s main request is to have the existing regulations expanded to allow the ‘religious purposes of Indian tribes’ exception to apply to any and all ‘sincere religious believers’, including non-Indians…”

The petition was submitted by Pastor Robert Soto, lead plaintiff in McAllen Grace Brethren Church v. Jewell (Secretary of the Department of the Interior), and the Becket Fund for Religious Liberty.  From his website (robertsoto.org), Soto states he is the current vice chairman of the Lipan Apache Tribe of Texas, a state-recognized tribe, and that he had 42 eagle feathers confiscated by “government agents” on March 11, 2006.

The case was settled in June 2016 with Soto receiving their feathers back.  The settlement agreement also called for the Interior Department to consider the petition “to modify existing regulations or issue new regulations concerning the possession of eagle feathers by persons who are not members of federally recognized tribes”.

Following the settlement, Soto said in a statement, “No one had ever won a case like this and many had even suffered time in prison…tonight, we gather together to celebrate the return of our eagle feathers.”

The petition itself calls for several changes to the rules governing eagle and other protected feathers including the following:

The proposed rule change by the U.S. Fish and Wildlife Service was published in the federal register on April 30 and comments closed on July 1.  According to the settlement agreement, the Department of the Interior is required to make a decision on the petition “within two years from the date it is received” which would make the deadline July 26, 2020.

The resolution calls for the U.S. Fish and Wildlife Service “to take no additional action on the petition” and asks Soto and the Becket Fund for Religious Liberty to withdraw their petition.