Spirit Animal, an indie-pop band from Brooklyn, New York will be playing in Cherokee on Saturday, Oct. 26 at the Harrah’s Cherokee Resort Event Center.

Steve Cooper, who is a founding member of the band, says that they have been missing coming to North Carolina on recent tours. 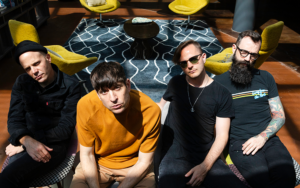 Spirit Animal, an indie-pop band from Brooklyn, New York, will be playing in Cherokee on Saturday, Oct. 26 at the Harrah’s Cherokee Resort Event Center. (Photo contributed)

“We really had an amazing connection there, and so we’ve had basically the next year, people from North Carolina every time we posted another show announcement being like, ‘ah! No North Carolina.’ I kept being like, hold on hold on,” said Cooper.

Cooper has come a long way to get where he is now. He used to do a lot of cooking in restaurants and private gigs before he could solely work on music. The band had a Kickstarter fundraiser for one of its early chances of going on tour. Though it never came to fruition, the plan was to tour the country, and Cooper would visit the homes in each city to cook a private meal. Cooper learned his way around a kitchen during his time cooking in a French restaurant in Los Angeles. It was his way of paying for his music when the band was first coming up.

“I paid for a couple music videos by doing private dinners in homes of wealthy people in New York. I did a dinner with like four guys having a giant meeting about international oil deals they were doing, and you’re supposed to not listen. Of course, I’m eavesdropping the whole time…It was good. We still get a lot of requests to do more food-related stuff, but it just got to the point where I really just wanted to focus on the music,” said Cooper.

Now, the band has millions of streams on different music services thanks to major hits like “Regular World” and “The Black Jack White”. Spirit Animal released their album “REBORN YESTERDAY” on Sept. 20.

The band has a label partnership with RED MUSIC, and Cooper says that it has opened the door to a lot of opportunities.

“I’d say the main difference was we got to work with some huge producers. Actually, our favorite producer, Ricky Reid, who’s done everybody. He’s got the new number one on Billboard; you know Lizzo ‘Truth Hurts.’ So, he’s a giant producer…we have been developing our networking of writing and producing sort of as we went, so there was a cool legitimacy thing with that.”

Cooper says that the band members receive influence in a lot of different places, and that can be heard in the music that they make together.

“You got one guy who’s like a Tom Petty fanatic basically growing up, other kid who came up in the D.C. hardcore scene, I came upon like strictly rap music, and our drummer is a Berkeley School of Music, fully jazz-trained everything. There’s really no choice for us but to have this mixed genre sound. But, I think for me, in terms of inspiration, definitely it’s always what’s new. It doesn’t have to be the music that sounds like your music, and it’s more about the attitude or the approach that people take that I like to model myself after more so than the sound.”

Cooper says that’s why their genre is hard to place because they use different styles and influences of music to create their sound. ‘Indie-pop’ doesn’t touch all the facets of the band, but it’s an idea that’s easier to promote.

The show in Cherokee will be Spirit Animal’s third show in North Carolina on this tour, and it will be wrapping up in December.

Spirit Animal will be opening for Theory of a Deadman on Oct. 26. The show begins at 7:30 pm, and you get ticket information at https://cherokee.ticketoffices.com/venues/harrahs-cherokee-resort-tickets.