Lt. Col. Lewis H. Harding Jr. (Ret.) retired from the U.S. Air Force on Jan. 6, 2016 after 32 years of service.  A first descendant of the Eastern Band of Cherokee Indians, he began his military career by enlisting in the Tennessee Air National Guard in January 1983 as an autopilot maintenance technician at with the 134th Air Refueling Group in Knoxville, Tenn.

While enlisted there, he finished his degree at Middle Tennessee State University and applied for Air Force pilot training into which he was accepted and began officer training in November 1985.  The next month, he was commissioned as a 2nd Lieutenant in the U.S. Air Force and reported to Williams Air Force Base for pilot training in the T-37 and T-38 aircrafts. 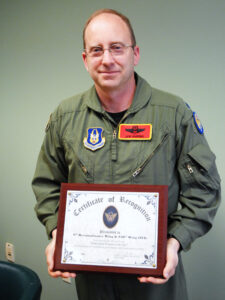 After initial pilot training, he attended KC-135 specialty training at Castle Air Force Base in Merced, Calif. in February 1987 and returned to the Tennessee Air National Guard in June 1987.  Two years later, in May 1989, he transferred to the 940th Air Refueling Group at Mather Air Force Base in California.

Lt. Col. Harding flew the KC-135 for 21 years eventually becoming a senior evaluator and instructor pilot in the aircraft.  Along the way, he held the following positions:

He flew combat missions in the KC-135 in the following operations: First Gulf War in Operation Desert Shield; Kosovo Campaign; Homeland Defense Missions after Sept. 11, 2001; and he was deployed in the Second Gulf War in support of Operations Enduring Freedom and Iraqi Freedom.

In March 2011, in the only unclassified and publicly releasable operation Lt. Col. Harding was involved in, he was named the Director of Pacific Integration just as the United States started Operation Tomodachi, an assistance operation to support Japan in disaster relief following the Tohoku earthquake and tsunami.  The operation involved nearly 24,000 U.S. service members, 189 aircraft, and 24 naval ships.  The Global Hawks operated from Beale provided nearly daily imagery to assist in those efforts, including constant overwatch of the Fukushima Reactor and also assisted the Japanese in rescuing thousands of isolated citizens. 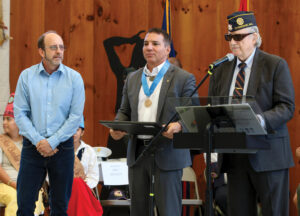 Lt. Col. Harding was the first Unmanned Aircraft Director of Pacific Integration in the history of the U.S. Air Force.  At the time of his appointment, there was only one aircraft in theater and it did not have permission to fly out of its basing due to the delicate negotiations with foreign governments.  By the end of his tour, Global Hawk Operations were commonplace with multiple aircraft deployed in theater.

He also served as a consultant to NASA at Ames Research Center in Mountain View, Calif. as an expert in High Altitude Unmanned Aircraft Operations.