The Sleepy Hollow Experience is coming to Cherokee starting this Thursday, Oct. 17.

Brian Clowdus, the producer and director, wants to make the show as impactful for the audience as possible. He is presenting the show as a 360 degrees experience that will take advantage of what the Mountainside Theatre has to offer. 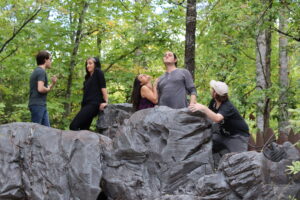 “For me it’s thrilling, it’s the only way that I produce. My company is called Brian Clowdus Experiences because I don’t like calling things plays. I don’t like saying you’re coming to a musical or theatre. Because I feel like the general public thinks that’s kind of boring. And the great thing about these experiential pieces is that it really is accessible and entertaining and immersive for everyone.”

Clowdus says that it’s been a blast of nostalgia to be back in Cherokee. He grew up in Alabama, and he distinctly remembers his trips to Cherokee and the mountains of North Carolina for family vacations.

Clowdus got his start in theatre as an actor but realized about 11 years ago that the producer/director role is his passion. The Sleepy Hollow Experience has been a significant part of his growth over the past few years.

“This show has actually been in development for seven years. Cherokee will mark our fifth opening this month.”

The other four locations are in Tarrytown, New York; Columbus, Ohio; Boston, Mass.; and the original location in Atlanta, Ga. Clowdus says that an essential facet of each show is embracing what each area and theatre has to offer.

Clowdus says that he hopes to make everything in the theatre something for the audience to take in. This is one of the primary reasons that attendance is being limited to the first 500 seats in the theatre.

“Once the audience members get out of their cars, they are in the world,” said Sarah Elaine, who is playing Katrina Van Tassel.

“They are in Sleepy Hollow. You get the experience right when you step foot outside. There’s pre-show stuff that always happens; there’s so much audience interaction.” 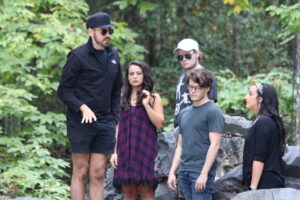 Brian Clowdus instructs his cast at a rehearsal. Opening night at is Thursday, Oct. 17 at 7:30pm.

Elaine is one of five primary actors in this production. She and one other, Karley Rene, are from Atlanta and have worked with Clowdus before. Elaine says that she has enjoyed working with Clowdus in the past, but this production has been different.

“Not only do I love the collaborative effort we as a cast and production crew have been able to have, I just love the area we’re in too. It’s so beautiful here, and I’ve really enjoyed being able to come here and do a show. Everyone’s been so welcoming, and it’s been such a refreshing new change of pace.”

Farley Norman, the man playing Ichabod Crane, has been on a shortlist for some time. The other two were locally cast, which is something that Clowdus likes to do with his experiences.

“I always hold local auditions because I also like the projects to feel like they’re based in the community. I think you do that, outside of the local touches on the show, by incorporating locals into the show.”

“It’s incredibly strange, especially because I’m used to working with like 70 or so people. It’s a big, big space and a big backspace. It’s very strange to have mostly five characters running around this separate world, basically, but it’s incredibly fun,” said Taylor.

Along with the size of the space and the small cast, all the actors will have the challenge of singing and playing instruments during the twenty-four shows over the next three weeks.

There will be two shows every Thursday, Friday, Saturday, and Sunday until Nov. 3. Ticket information can be found at https://www.cherokeehistorical.org/the-sleepy-hollow-experience/.

“The goal is for this to come back every year. Of course, it’s all based on year one, but the goal is that it becomes a Halloween tradition for Cherokee,” said Clowdus.