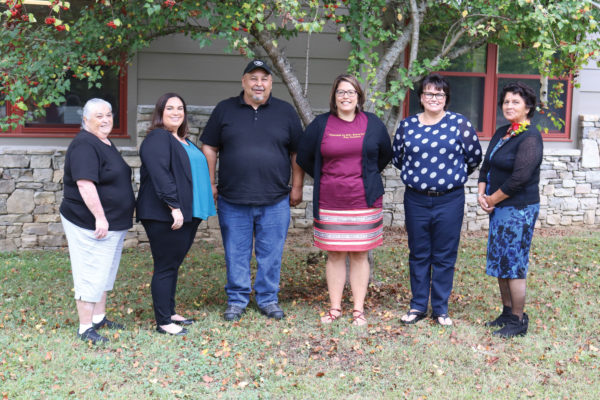 The meeting was called to order at 10:43 am with Board members Gloria Griffin, Karen French-Browning, Isaac Long, Jennifer Thompson, Tara Reed-Cooper, and Regina Ledford-Rosario; School Board Assistant Sunnie Clapsaddle; HR Director Heather Driver; and Assistant Superintendent Dr. Beverly Payne present.  Superintendent Dr. Michael Murray was on scheduled annual leave. The selection for a Tribal Council representative will be made at a later date.

The returning members of the Board approved the minutes and agenda from the Sept. 16 meeting, and there was no old business to discuss.

Then, there was the swearing-in of re-elected member Jennifer Thompson (Yellowhill) and new members Tara Reed-Cooper (Big Y) and Regina Ledford-Rosario (Painttown). Dr. Payne led the trio in the process of swearing to their duties and Driver had them fill out the necessary information before proceeding.

The first piece of business for the new Board was to elect School Board Officials for the next two years. Long nominated Thompson for chairperson, and Ledford-Rosario nominated Griffin for the same position. The votes between Thompson were split at three a piece, and with no Tribal Council representative present for a tie-breaker it was set aside for the time being. It is to be handled like the last time there was a tie, when the election for vice-chair was between Griffin and John Crowe. They moved on with the elections and decided among themselves later.

The new vice-chair is Long. He was nominated by Thompson and was voted in 4-2. Griffin had nominated Ledford-Rosario for the seat, which were the two other votes. Long would lead the rest of the meeting due to the lack of a chairperson. The final position voted on was secretary. Griffin nominated Reed-Cooper for the position, and there wasn’t a second nomination so Reed-Cooper was voted in unanimously.

With no guests, the Board turned their attention to the consent agenda. There were six items on the agenda. One of which, resolution 20-077, was pulled for further discussion. The other five were voted unanimously, establishing the following:

A closed session was then called to discuss resolution 20-077.

Once the session was opened, the Board unanimously approved Mike Winchester as an Alternative Classroom Teacher for Cherokee High School.

Thompson presented the Silverbell Award that was given to the CCS Board at the Western District Meeting, which is given to a Board of Education that has undergone enough training hours among the members.

The annual state Board of Education conference that is being held in Greensboro next month was also discussed. The experienced members explained the training options at the conference as well as travel guidelines.

The next meeting of the CCS Board of Education will be held Monday, Oct. 21 at 4:45 pm.