After falling behind early, Cherokee kept moving and grinding and ended up doubling Rosman 42-21 in a win at Ray Kinsland Stadium on the evening of Friday, Oct. 4.  The Braves were led by Bobby Crowe, senior quarterback, who was back in the line-up after being injured in the first game of the season.  On the night, he completed 10 of 19 passes for 138 yards and 2 touchdowns, and he ran 7 times for 44 yards and 1 touchdown. 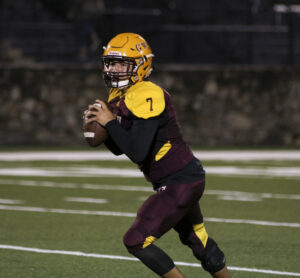 Bobby Crowe, Braves senior quarterback, drops back for a pass during a game against the Rosman Tigers at Ray Kinsland Stadium on the evening of Friday, Oct. 4. On the night, he completed 10 of 19 passes for 138 yards and 2 touchdowns, and he ran 7 times for 44 yards and 1 touchdown. (SCOTT MCKIE B.P./One Feather photos)

Cherokee had one of its best games of the season offensively with 306 total yards including a pretty balanced offense with 138 passing yards and 168 rushing yards.  Anthony Allison, Braves running back, had a good night with 14 carries for 104 yards and 2 touchdowns.  In the fourth quarter, he broke around 10 tackles on one play en route to a touchdown that would be called back for a penalty.  On the very next play, he rinsed and repeated and ran 25 yards for the last score of the game.

Note: Defensive statistics were not provided to the One Feather for this game.

Rosman opened up the game with a bang as Thomas Collins took it the house on a 55-yard run in the first minute of the game to give the Tigers a 7-0 lead early.  On the ensuing kickoff, Rosman tried an onside kick and recovered it at the Braves 44-yard line.  But, their drive stalled and resulted in a punt. 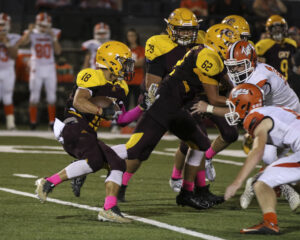 Anthony Allison (#18), Braves running back, runs hard in the first half of Friday’s game. On the night, he rushed 14 times for 104 yards and 2 touchdowns.

The remainder of the first quarter was punt central.  The second quarter, however, was a scorefest with each team scoring twice.  Rosman took it to 14-0 early on, and then Cherokee got the ball and drove down deep into Tigers territory.  Behind a strong line, Crowe ran in from the 1-yard line to get the Braves on the board.  Rocky Peebles added the point after to make it 14-7.

Crowe and company came right back as he connected with Bradley on a 31-yard touchdown pass.  Peebles added the PAT, and Cherokee only trailed 21-14 at the half. 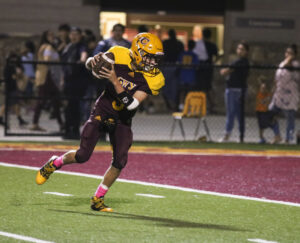 The third quarter opened with another onside kick by the Tigers.  But, this time the Braves were ready.  Allison scooped it up and ran 53 yards down the right sideline for the score and equalizer.

The third would end with the teams deadlocked at 21-21.

The fourth quarter was all Braves as they scored three times to seal the victory.  Allison scored twice on runs of 23- and 25-yards and Crowe connected with Frady on a 39-yard pass.