CULLOWHEE – The Rooted in the Mountains theme of “Giduwagi ― Appalachian Historical Ecology” struck a resounding note with the record number of attendees at this year’s symposium.

Nearly 400 people participated in the 10th annual gathering, hosted by Western Carolina University and supported by a grant from the National Institute on Minority Health and Health Disparities, on Thursday, Sept. 26, and Friday, Sept. 27. It was the largest attendance to date. More than 50 people enjoyed a native food dinner served by members of the Native America Indian Women’s Association. 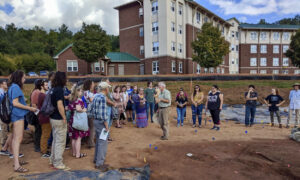 Brett Riggs, WCU’s Sequoyah Distinguished Professor of Cherokee Studies (center), speaks with Rooted in the Mountains attendees about the findings from an archaeological dig on campus near Norton Hall. (Photo by Pam Myers)

The theme was topical and philosophical, as it reflected both the changing landscape and habitat of the mountains, and attitudes toward the natural resources of Southern Appalachia. Roughly translated, “giduwagi” is Cherokee for “the ground belonging to the creator” or when referring to the tribe, “people of the mountains.”

The decade-long series of forums have sought to integrate indigenous and local knowledge with health and environmental issues. Guest speakers and discussion groups have touched on ethnography, literature, art, music and native and western science, with attendees typically including local residents, students from WCU and other universities, scientists, local and state policy makers, and health professionals.

“Each symposium is designed to raise awareness,” said Pam Myers, event organizer with WCU’s Culturally Based Native Health Programs, a collaboration between the Eastern Band of Cherokee Indians and WCU’s College of Health and Human Sciences. “We always encourage anyone concerned about our mountain landscapes and learning more about native ways of understanding to attend. We’re thrilled for the strong showing of interest and support from campus and surrounding communities.”

Tom Belt, retired coordinator of WCU’s program in Cherokee language who is noted for his knowledge and insights into Native American heritage and culture, was the keynote speaker. He currently teaches a Cherokee language course with Stanford University’s Language Center. A member of the Cherokee Nation of Oklahoma, he was recently named recipient of the tTibe’s Community Leadership Individual Award, given to recognize citizens who have tirelessly given, without hesitation, their time to make their communities more vibrant livable places. The Cherokee Nation is one of three federally recognized Cherokee tribes in the U.S., with the other two being the local Eastern Band of Cherokee Indians and the United Keetoowah Band of Cherokee Indians of Oklahoma.

“Today we are finding out that those mythological superstitions that we were told that we believed in are now becoming scientific fact,” he said. “It is ironic that they are now finding out that trees actually do communicate with each other, to the point of where trees may have memory.”

A field trip to Judaculla Rock, a soapstone boulder covered in Native American petroglyphs, was led by Belt and T.J. Holland, cultural resources officer for the Eastern Band of Cherokee Indians. A second field trip to an archaeological dig at WCU’s Norton Hall, part of the historic site for Two Sparrows Village, was conducted Brett Riggs, the university’s Sequoyah Distinguished Professor of Cherokee Studies, and Ben Steere, director of the university’s Cherokee Studies Programs.

For more information on the Rooted in the Mountains symposium, go to nativehealth.wcu.edu or call 828-227-2164.