Acelebration for the merger of the Tsali Care Center and the Cherokee Indian Hospital Authority (CIHA) was held on Tuesday, Oct. 1 at the Center located in the Birdtown Community.

“I think it’s significant for the Tsali Care Center, because now we move it under the Cherokee Indian Hospital Authority where we have all of the support to benefit them and bring value. For example, a lot of our infrastructure at the hospital is much better aligned to support the needs of the Tsali Care Center than the Tribe is able to, because the Tribe is a large municipality.” 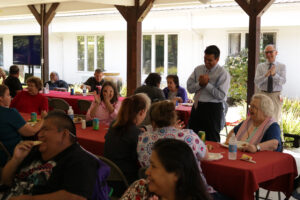 A celebration for the merger of the Tsali Care Center and the Cherokee Indian Hospital Authority (CIHA) was held on Tuesday, Oct. 1 at the Center located in the Birdtown Community. (JONAH LOSSIAH/One Feather photo)

Cooper says this has move is the culmination of a two-year process. He says that is was a very measured approach from everyone involved to ensure that it was a smooth transition.

“Any time there’s extra work, there’s always some stresses with that. But, it’s been easy to work through it, so I’ve very appreciative of that,” said David Hunt, the Administrator at Tsali Care.

Hunt continued by saying there are several benefits both in the short-term and the long-term when it comes to the merger.

“I think the biggest thing that I see, being aligned with the hospital, we are aligned with a facility that is accustomed to, has policies and procedures in place and everything else to support a 24/7 operation,”

It will still take some time to fully transition operations between the two facilities, but an impact can already be seen at the campus of the Tsali Care Center.

“We have a grounds crew that started first thing this morning,” said Sheyahshe Littledave, CIHA public information coordinator.  “They’re gonna repurpose and redo a lot of the landscape here. I know a lot of the residents like to be outside and things like that…I think just being able to see those small, incremental changes right off I think is beneficial.”

Cooper said that now that the merger is official, the process of phasing the program in can begin.

“And then turn our attention on to supporting the plant and facility and the environment. And most importantly, bring the hospital’s resources to add value to the human capital down here. To improve employment conditions, provide greater support to the employees in the forms better staffing and training…if we can become the employer of choice, then becoming the facility of the choice for the community will be a function of that.”

Cooper says that the CIHA and tribal Leadership have done a lot to make this move possible, and that he is confident in their efforts moving forward with the program.